Whether you’ve lived in the Bay Area for two years or two decades, chances are there are a handful of San Francisco destinations you’ve never visited. The holidays—when many of us have friends or family visiting from out of town—can be the ideal time to check out some of the places most people only ever see on postcards.

We’ve compiled this overview of the city’s most iconic points of interest—taking note of those that live up to the hype and offering alternatives to overrated tourist traps. So get out of the house and see some sights. Or, you know, just pass this list on to your guests and buy yourself a little time to catch up on all the shows you’ve been missing.

✅ The Tonga Room: Worth It

The Tonga Room, located inside the Fairmont Hotel at the top of Nob Hill, may be the most touristy of local tiki bars—and it delivers! Every half hour, sheets of rain fall from the ceiling, re-creating the ambiance of a tropical thunderstorm. Many nights, the establishment’s house band, The Island Groove, plays from a thatch-roofed boat that floats around the bar’s central lagoon. Mixed drinks are strong and steep ($18+), but we feel it’s worth the splurge for this one-of-a-kind SF spot that the late Anthony Bourdain dubbed “the greatest place in the history of the world.” (CJC)

Despite a major remodel of its chocolate shop earlier this year, we find that the overall experience at Ghirardelli Square is not worth the trek and the price of parking (which starts at $18 and creeps up from there). The square is chockful of overpriced restaurants and Ghirardelli’s $15 ice cream sundae, in the opinion of our staff, is not tasty or mindblowing enough to warrant the extravagance.

Instead, if you’re looking to sate your sweet tooth, head to Dandelion’s 16th Street chocolate factory, which is now hosting tours and tastings ($20+), or one of SF’s many small batch ice cream shops. (CJC)

The view from Coit Tower, especially on a clear day, is hard to beat and the history of the landmark is intriguing as well. Built with funds bequeathed by firefighter fanatic and heiress Lillie Coit, the tall and slender concrete tower offers 360-degree views of the city and San Francisco Bay and boasts an impressive and valuable array of WPA-era murals deeply influenced by the work of Mexican muralist Diego Rivera. Art history buffs may enjoy adding on a $5 or $10 docent-led tour of the murals.

Adventurous and fit family members may enjoy climbing to the base of Coit Tower via the Filbert Street Steps. You can also hail a car or Muni’s 39 Coit bus to the base of the tower.

If you’re looking for more top notch views of the city with a drink in hand, we recommend the Top of the Mark. Sure the drinks hover around $20, but what you’re really paying for is the view.  The tower is closed on Thanksgiving, Christmas and New Year’s Day.

❌ Skip (Most) of Fisherman’s Wharf
✅ Go To The Musée Mécanique

Most things at Fisherman’s Wharf are totally skippable, but if your loving family insists on going there, you must insist on a stop at the Musée Mécanique—an old-timey arcade and museum with an array of amusing coin-operated machines and vintage games that will tickle and delight almost anyone’s inner child. The assemblage of over of 300 “mechanical entertainment devices” is one of the last vestiges of San Francisco’s Playland at the Beach, and it has a spot in film history as well.

Some of the Musée Mécanique’s most iconic contraptions, the Arm-Wrestling Machine and a gap-toothed animatronic known as Laffing Sal, made appearances in the first installment of Disney’s Princess Diaries, starring Anne Hathaway and Julie Andrews. (And if you’re curious to know, Andrews actually did beat the arm wrestler.)

Admission is free, but games range from 1 cent to $1, with most games costing 25 or 50 cents, so be sure to bring coins and cash.

As for Pier 39, unless you have a hankering for bad mall vibes, gimmicks or a glimpse of the sea lions, skip! (CJC)

Chinatown is chockful of touristy souvenir shops on Grant Avenue, but the truly hidden gems are a bit off the beaten path. The long line for dim sum at Gong Mok Kok Bakery is worth it. And stopping for a fortune cookie sample at the tiny Golden Gate Fortune Cookie Factory is a fun aside. The neighborhood has no shortage of great restaurants and many styles of Chinese food to choose from. There’s also a fascinating exhibit about the life of martial arts icon Bruce Lee, currently on view at the Chinese Historical Society of America, which is sure to excite kids, parents and grandparents alike. (CJC)

📍 Between Divisadero and Webster Streets

While commercial center of Haight-Ashbury, Haight Street, is closely associated with the hippie movement and the Summer of Love, the neighborhood’s glut of flower power souvenir shops and stylized bohemian stores can feel like its trying a little too hard.

Instead, we recommend the corridor between Divisadero and Webster streets in the Lower Haight. Along this section of Haight Street, you’ll find some awesome record stores, including Rooky Ricardo’s, Vinyl Dreams and Groove Merchant Records. Stop in for an authentic German sausage dish at Berliner Berliner, and get some holiday shopping done at OG streetwear shop Upper Playground or home goods boutique Earthen, both just off Haight Street on Fillmore. If you’re feeling adventurous, head even further down Haight Street toward the Haight Street Art Center, which usually has a thoughtfully curated display of rock & roll images and graphic arts on view. (CJC)

🤷‍♀️ Lombard Street: You Kinda Have To

“Doing” Lombard Street—which is to say, riding the brakes down the absurdly curvy and beautifully landscaped block between Hyde and Leavenworth streets in Russian Hill—is about as fun as driving two miles an hour in gridlock can be. It’s obligatory for visitors, yes, but the traffic-clogged approach can be daunting to drivers unfamiliar with the city’s steep topography. The entire experience is often crushingly anticlimactic, especially if you’re stuck in the backseat, although of course, you’ve got to do it once.

Not to be a huge downer, but it’s not even the squiggliest street in the city, which locals know to be Vermont Street between 20th and 22nd streets in Potrero Hill. Nor is it the steepest: 22nd Street between Sanchez and Church streets in Noe Valley can be truly terrifying for the unprepared. (Yes, it’s one-way.)

The best way to do Lombard is to leverage photography’s ability to inspire envy in others. Stand at the bottom (near the intersection of Lombard and Leavenworth streets) with the curve of it visible behind you, take a group picture, and marvel that the crabby neighbors who chose to live along a world-famous landmark actually tried to stop tourists from visiting. (PAK)

✅ The Painted Ladies: Worth It

Best known for their recurring cameo appearance in the intro of the popular sitcom series Full House, the Painted Ladies are pop culture icons and a longstanding symbol of San Francisco’s Gold Rush wealth and gorgeous Victorian architecture.

Parking around Alamo Square may be a headache—we recommend public transit or rideshare to get there instead—but it’s worth setting your sore eyes on this architectural eye candy, especially with a cup of Lady Falcon coffee in hand. The San Francisco-born coffee club sets up shop with its iron gray truck on Thursdays from 9 a.m. to 3 p.m., Fridays from 8 a.m. to 3 p.m. and Saturdays and Sundays from 10 a.m. to 4 p.m.

The park overlooking the Painted Ladies is also an ideal spot for a picnic if you’d prefer to dine al fresco, and if you’re looking for a more substantial meal to accompany your sightseeing, Divisadero Street with an assortment of shops and restaurants is a short stroll away. (CJC)

While the hustle and bustle of North Beach’s bars and restaurants may be too much for locals, there are some true gems in San Francisco’s Little Italy, including literary beacons City Lights and Vesuvio Cafe.

Visit these venerable North Beach establishments where the beatnik movement got its start. Vesuvio Café, which is housed in a 1913 Italian Renaissance Revival building, was started in 1948 by art enthusiast Henri Lenoir with the intention of establishing a bohemian gathering place. Artists, chess players, off-the-clock exotic dancers and people from all walks of life can be found here.

Synergy between the two establishments was sparked by Lawrence Ferlinghetti’s 1953 opening of City Lights bookstore across the street as more people flocked to the area in search of freedom of artistic expression. Thousands of books are available at City Lights, many of which are surrounded by images of famous San Francisco authors and other historical artifacts. The alleyway between the two businesses, Jack Kerouac Alley, is covered in murals. (MM)

Twin Peaks is a place loved by locals and in some ways feels like their favorite secret place, despite its popularity. It’s the ideal backdrop for an Instagram photo, a romantic destination to end a date, or even a nice hiking spot. Whether you visit during the day or at night, this 360-degree panoramic view of San Francisco from nearly 1,000 feet up will not disappoint. The Twin Peaks are two hills in the geographic center of San Francisco. A walk, bus ride or drive to the top will allow you to see most of the city’s landmarks, including the Golden Gate Bridge, Bay Bridge, Alcatraz and the Transamerica Building. (MM)

Alcatraz Island has our staff split on whether a ferry ride across the bay is worth the visit. On the one-hand, you could say it’s just a former prison on a rock. On the other, the island is a national park with lots of history to share. On tours of the former prison, which housed infamous mobsters such as Al Capone and James “Whitey” Bulger, park rangers do a good job of contextualizing the island’s Native American history and its 1969 occupation by indigenous activists. Presentations of thought-provoking plays, showcases of work by world-renouned artists, an award-winning audio tour and thoughtfully curated exhibitions, such as a current one on mass incarceration in the U.S., have further enriched the island’s cultural programming.

Whether you choose to go for a day, night or behind-the-scenes tour, you’re likely to learn a lot! But we also understand if you don’t want to visit an ex-prison on your family holiday, so the choice is yours!
While there is no federal entrance fee for Alcatraz, you will need a ferry ticket to get to and from the island from the National Park Service’s authorized concessioner. (While some legendary prisoners have attempted escape, you likely won’t have much luck swimming across without some serious training.)  (CJC)

Fri Nov 25 , 2022
You can never put a price on a high-quality suitcase — okay, maybe you can, but what we’re trying to say is your luggage plays a very important role in the success of your trip. If your go-to suitcase needs replacing, or you just want to be that savvy traveler […] 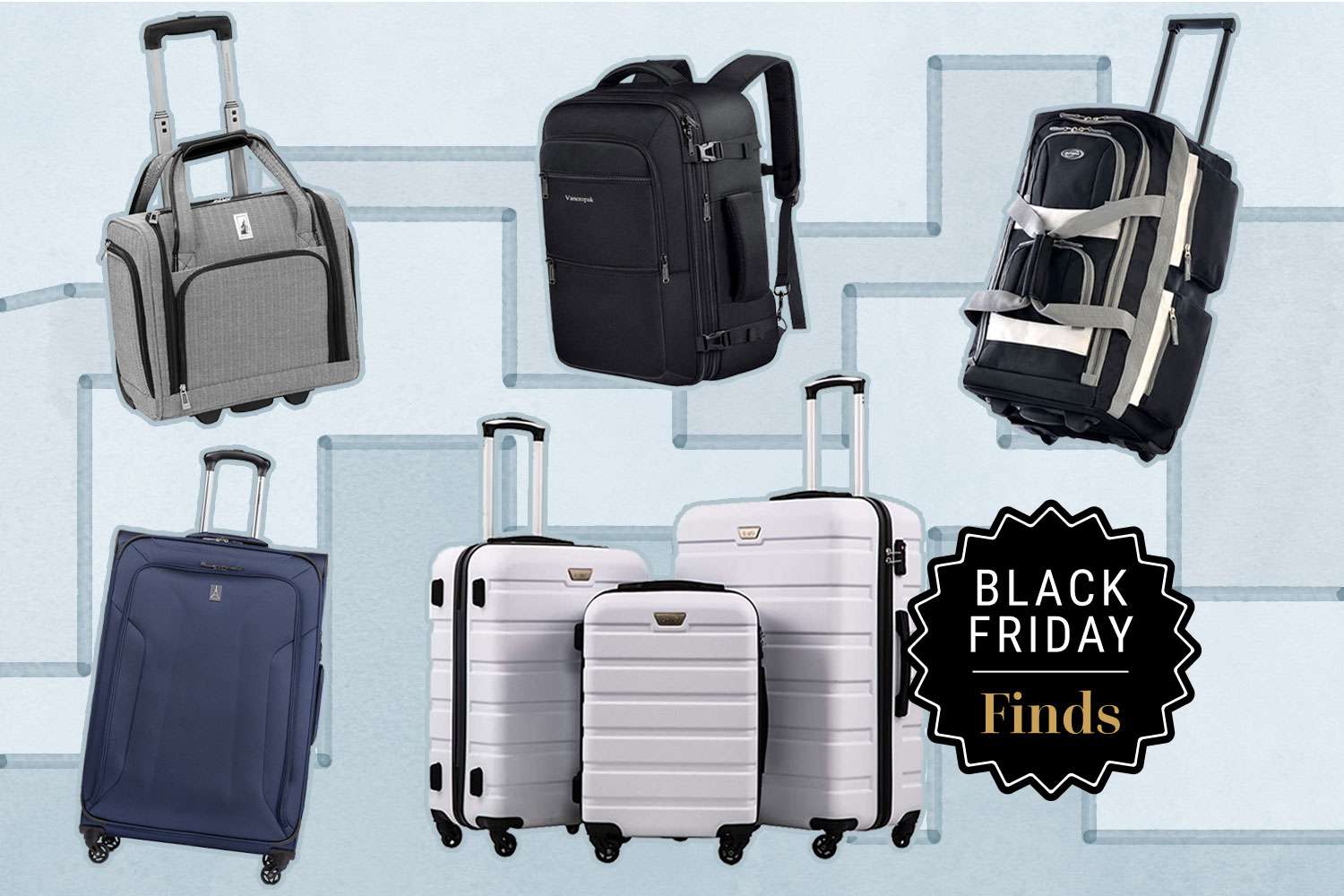