After too long away, Irish American genealogists Mike and Kate Lancor, are back chasing their ancestors in Ireland and they brought their son, daughter-in-law and grandson along for the ride.

On Sunday, June 19, 2022, we landed at the Dublin Airport with our son Brian, daughter-in-law Rachael and grandson Ben after losing two years of time in Ireland due to the Covid pandemic.  For the three of them, it was the first time they had visited the Emerald Isle.  As for us, stepping off the plane and feeling the Irish breeze was our “welcome home again” to the homeland of so many of our Irish immigrant ancestors. 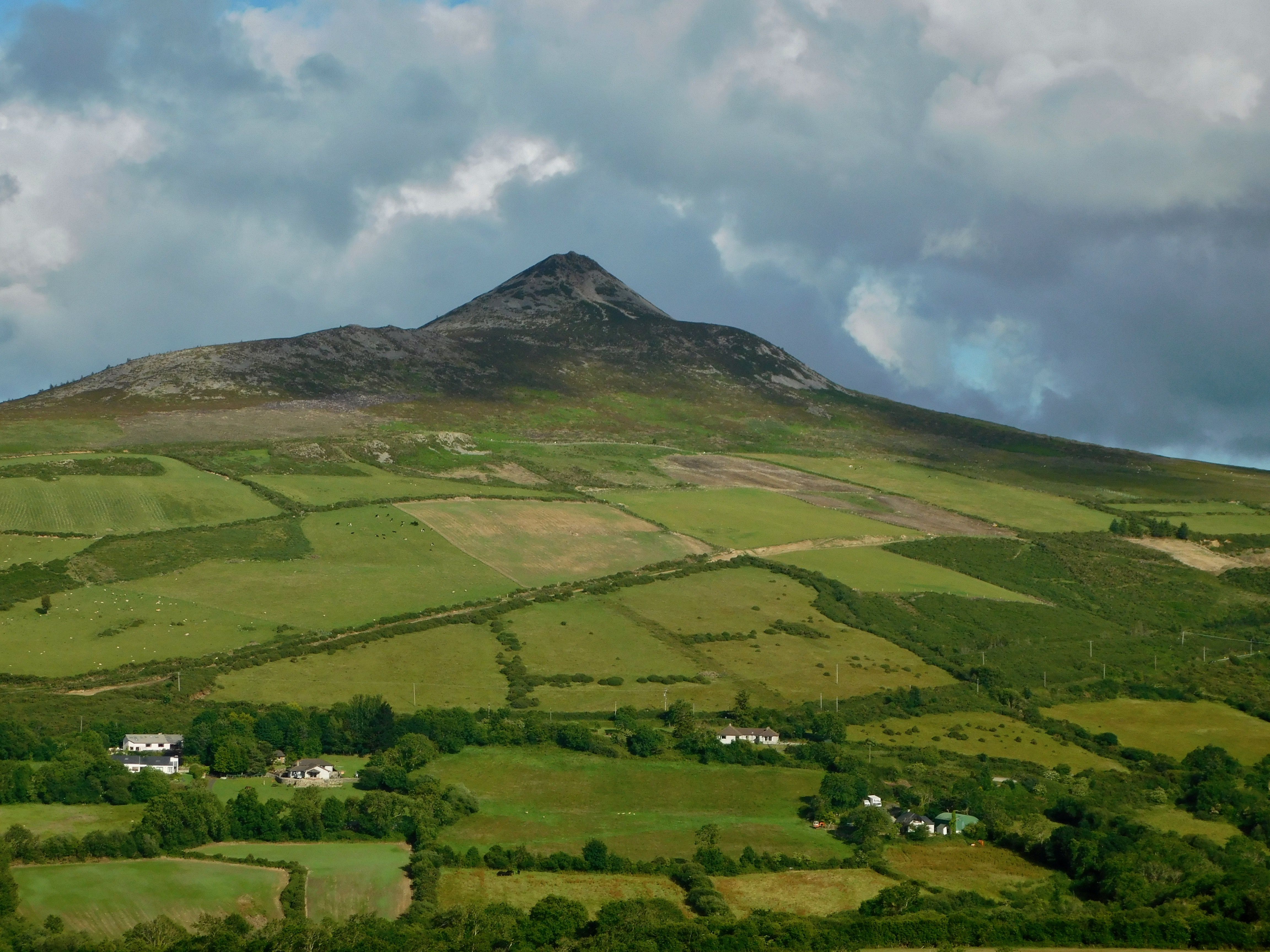 View of the Great Sugar Loaf Mountain in Wicklow County taken from Coolakay House B&B.  How many “shades of green” can you count in this photo?

It was a whirlwind trip for the five of us.  So many places to go, sites to see, friends to visit, and long-lost cousins to meet.  As we traveled from one beautiful part of Ireland to the next, we were all mesmerized and enchanted by the fields of grain, rolling hills and stunning mountains.

After visiting Ireland in the late 1950s, Johnny cash self-penned the song “Forty Shades of Green” in which he called Ireland “the emerald of the sea.”  Indeed, the shades of green are breathtaking! 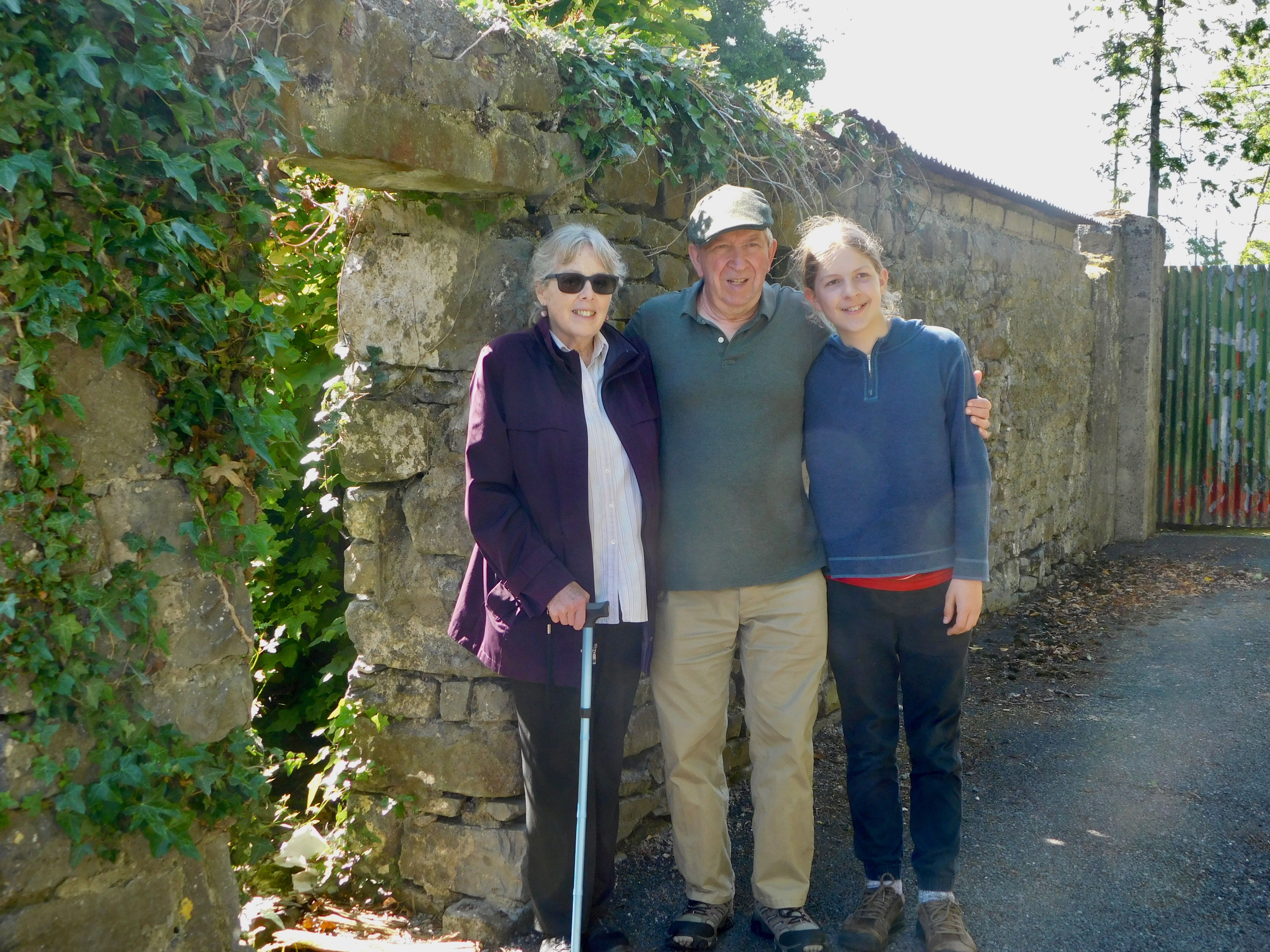 Our first stop was a surprise visit for Kate to the small town of Templemore in Co. Tipperary.  Kate’s great grandmother Mary Waters was baptized in Templemore in 1831 and emigrated to Albany, NY in the mid to late 1840s.  On several previous trips, Kate and I visited the ruins of the tenement houses on Pig’s Foot Lane in Templemore where Mary Waters was born, but it was a vivid first-time lesson of life during the famine years for Brian, Rachael and Ben. 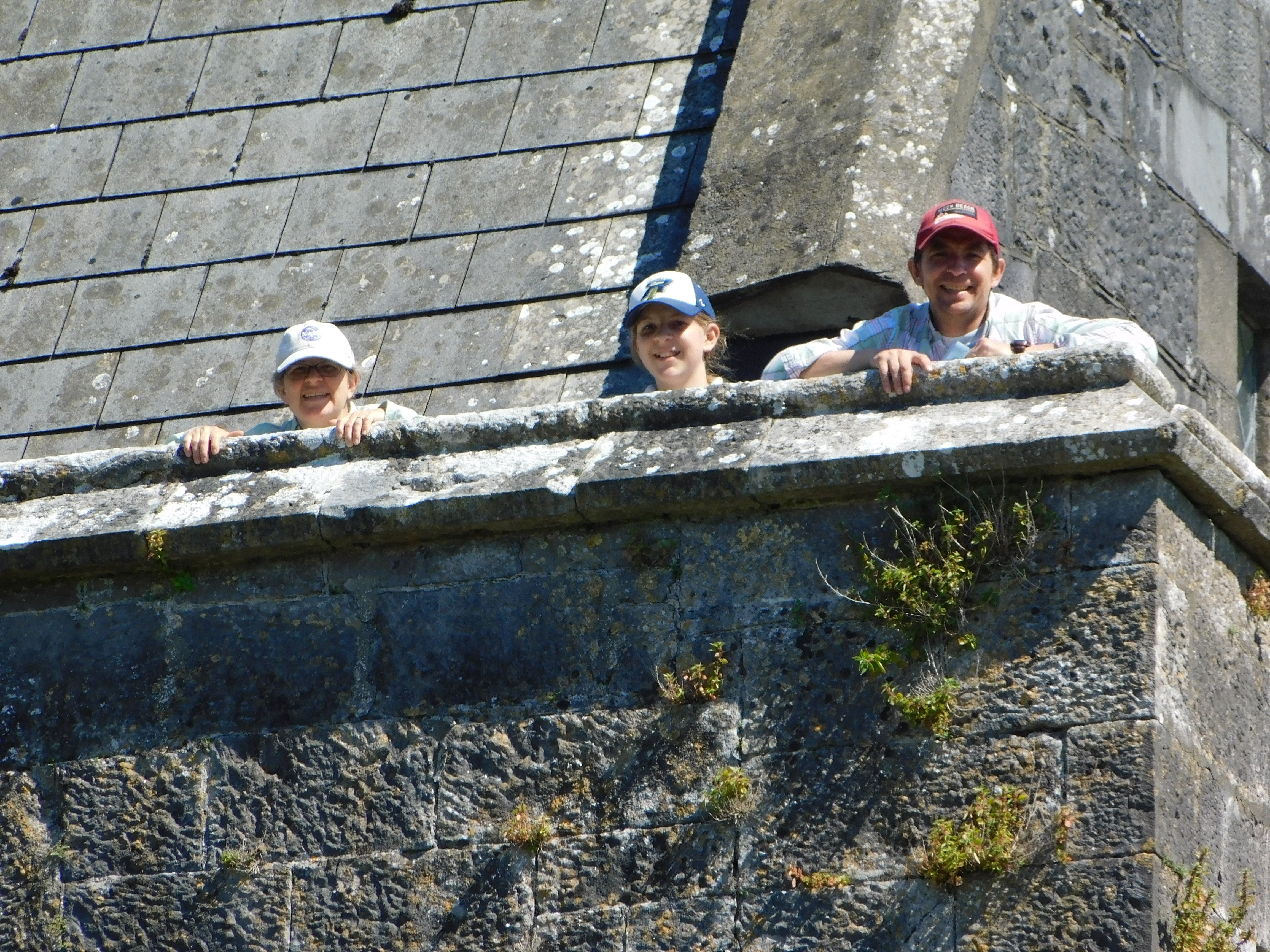 Rachael, Ben and Brian are all smiles from the top of Crauggaunowen Castle in Co. Clare built circa 1550.

Our time in Co. Clare included stops at the Cliffs of Moher, the Pulnabrone Dolmen, Craggaunowen Castle, and the Bunratty Castle and Folk Park.  All of these fantastic sites can be found in any guide of places to be seen in Co. Clare.  Yet, we were most amazed by the Caherconnell Stone Fort located on the “back roads” of the Burren.

This Bronze Age medieval stone ringfort was occupied up to the late 16th century.  If you time your visit right, you can even take in a sheepdog demonstration on the grounds of this historic location.  Our home base for Co. Clare was the Bunratty Haven B&B. 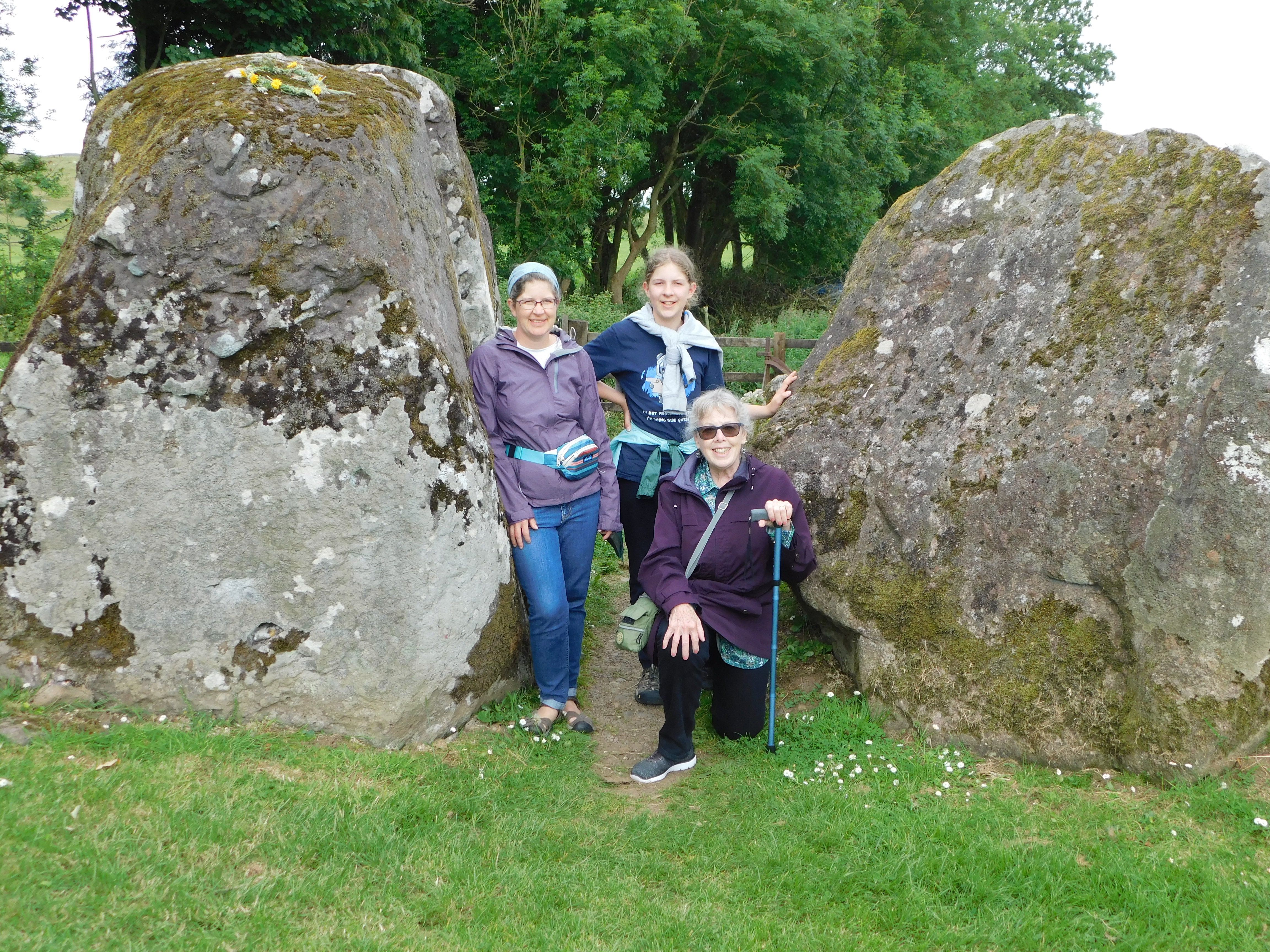 Rachael, Ben and Kate at the Grange Stone Circle which has 113 standing stones and was built circa 2,200 B.C. near Lough Gur, Co. Limerick.

On June 21, the Summer Solstice, we made our way to Lough Gur in Co. Limerick with a stop at the Grange Stone Circle which is Ireland’s oldest and largest stone circle and is aligned to the summer solstice.

A special day for Kate since her mother Mary Fitzpatrick was born on June 21, 1913, and was the granddaughter of Mary Waters born in Templemore in 1831.  Lough Gur is one of Ireland’s most ancient archaeological sites with hiking trails that lead to the most spectacular views. 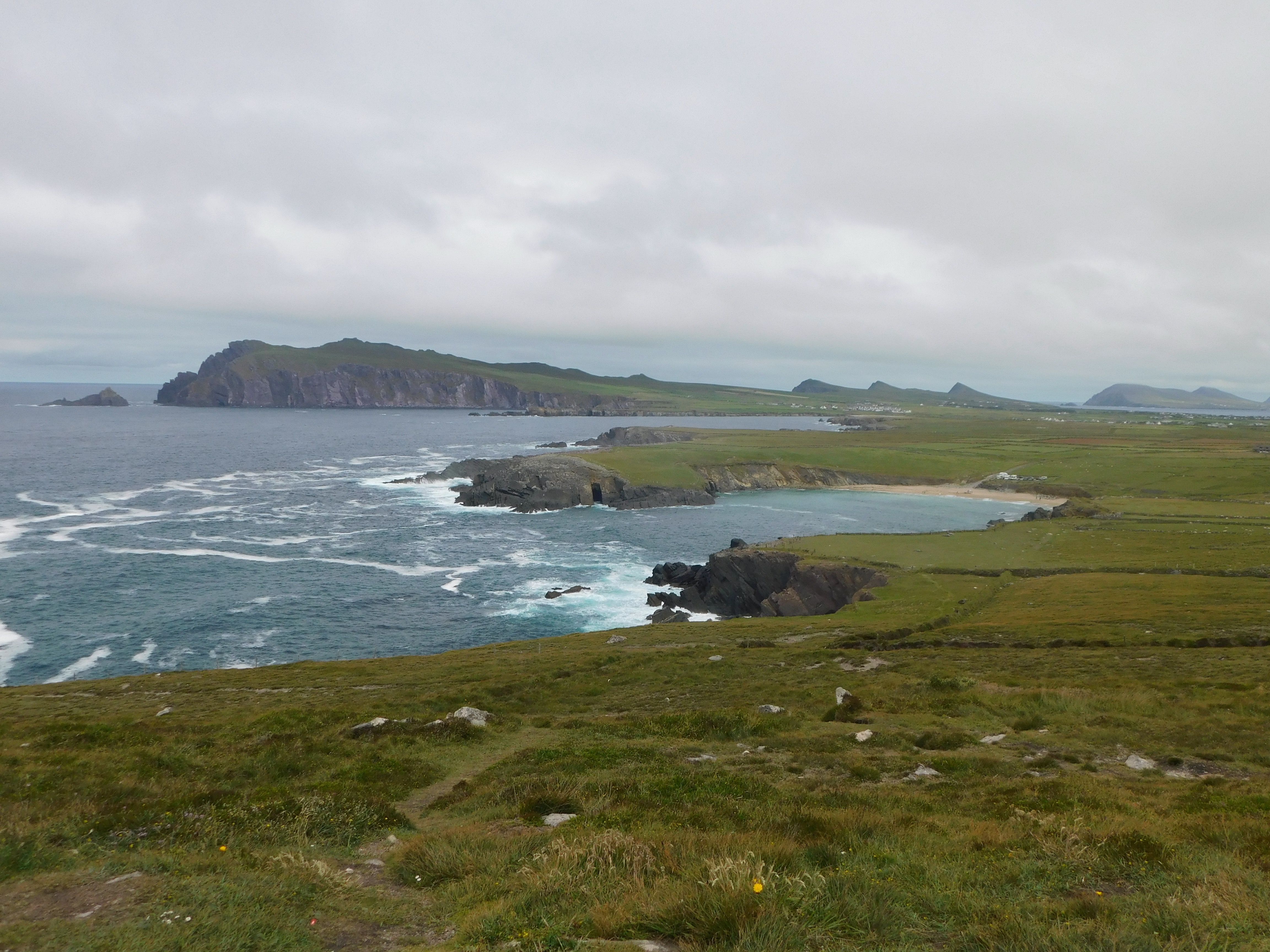 Slea Head drive on the Dingle Peninsula provided us with this spectacular view of Clogher Beach with the Three Sisters on the horizon.

We spent a day on the Dingle Peninsula which was on Brian, Rachael and Ben’s must-visit list.  From Inch Beach to Slea Head Drive, this most scenic route provides seemingly endless sites including the Fahan Bee Hives, Dunbeg Ring Fort, Gallarus Oratory, Kilmalkedar Church and incredible views of the Great Blasket Island.

As for Dingle Town, we could not have landed in a more delightful place to bask in the harbor scene, take in a walking tour, enjoy a delicious ice cream treat, and have dinner outdoors before heading back to the Glenfort House B&B in Tralee. 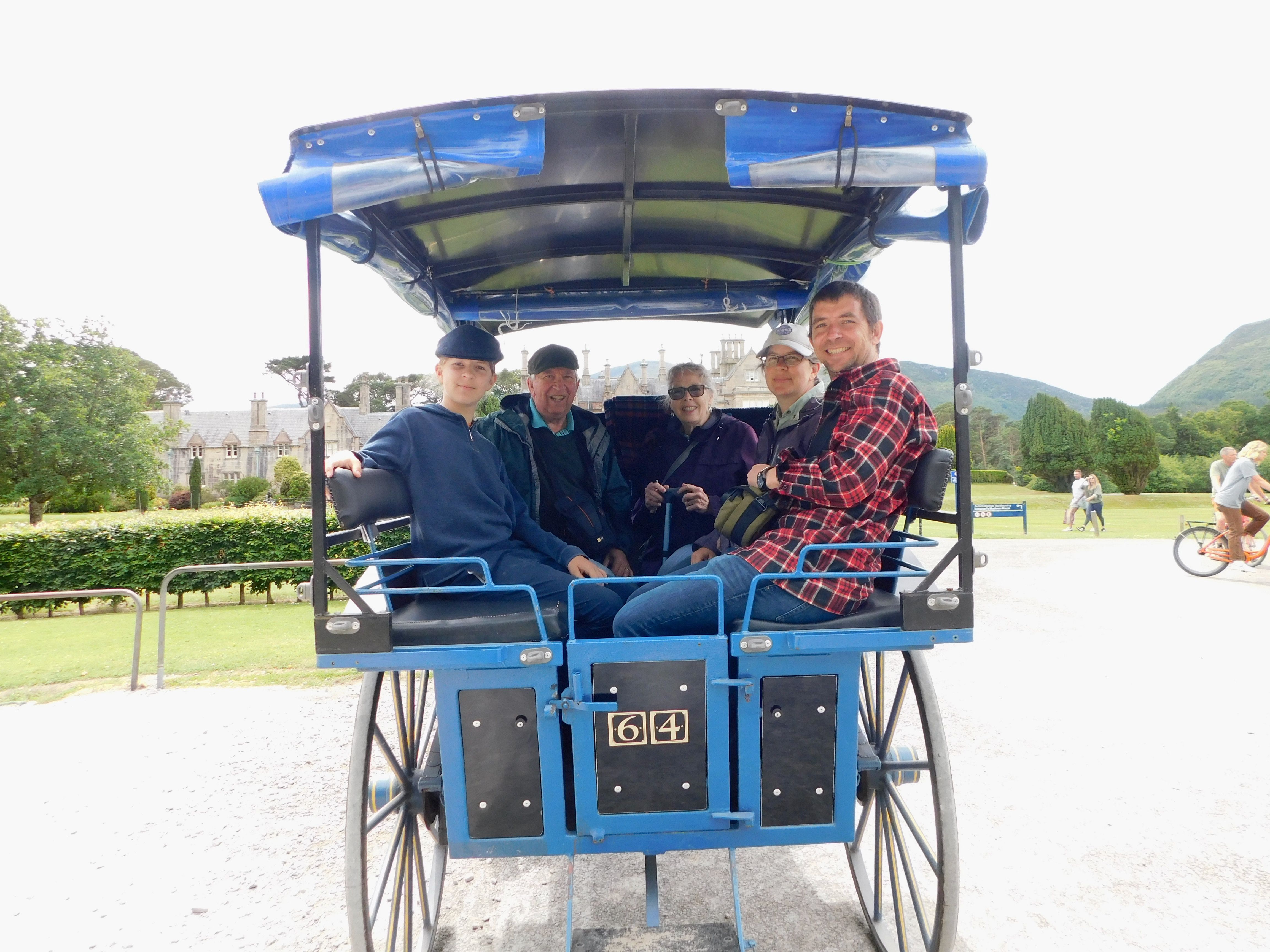 Taking a hourse pulled jaunting car ride from Muckross Castle and Gardens is the perfect way to see view of Muckross Lake and visit the enchanting Torc Falls.

The streets of Killarney and the Killarney National Park provided all of us with a snippet of the Ring of Kerry.  A horse-pulled jaunting car ride to Torc Falls from Muckross House and Gardens was a marvelous way to take in the views and banter with our jaunting car driver.  We ended our day in Killarney by walking the streets, sightseeing and shopping, more ice cream, and by joining in the signing of Irish songs at the Danny Mann Pub. 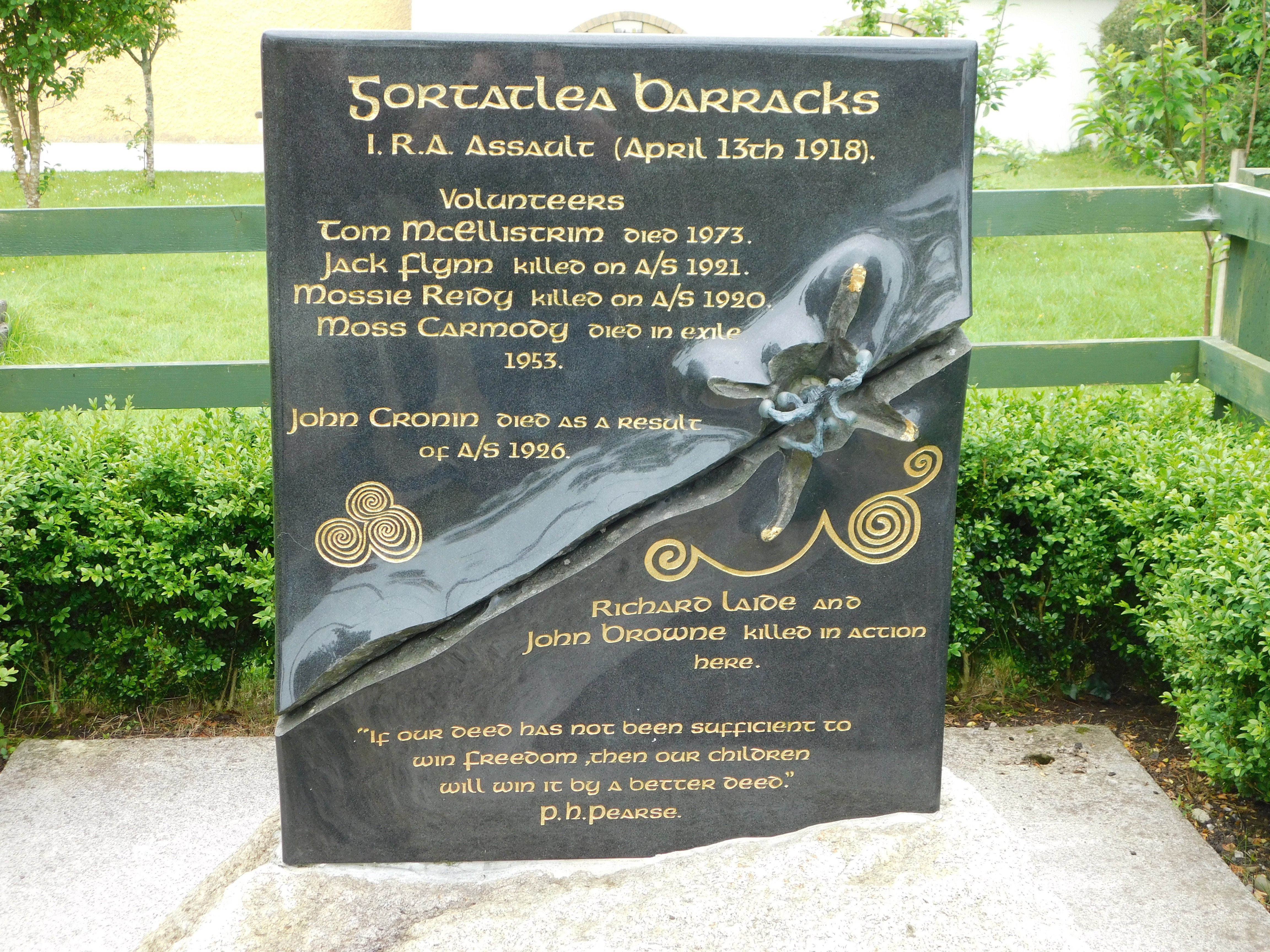 Monument in memory or Richard Laide and John Browne who were killed in an IRA raid in Gortatlea, Co. Kerry on April 13, 1918.  A crowd of 6,000 attended their funerals in Tralee and both are buried in the Rath Cemetery.

One of our side excursions between Tralee and Killarney was a stop at the memorial for Richard Laide and John Browne who were killed on April 13, 1918, when they were two of six I.R.A. members who raided the Gortatlea Police Barracks.

Mike’s family history includes tales of this Richard Laide having been one of the early Irish Republican Army deaths leading up to Ireland’s fight for freedom and the Irish Free State formation in 1922.  Mike’s 3rd great grandfather Richard Laide and his family emigrated from Ballyheigue, Co. Kerry to northern New York State in the late 1840s during the famine era.  The Laides of Ballyheigue and Tralee were undoubtedly connected to one another. 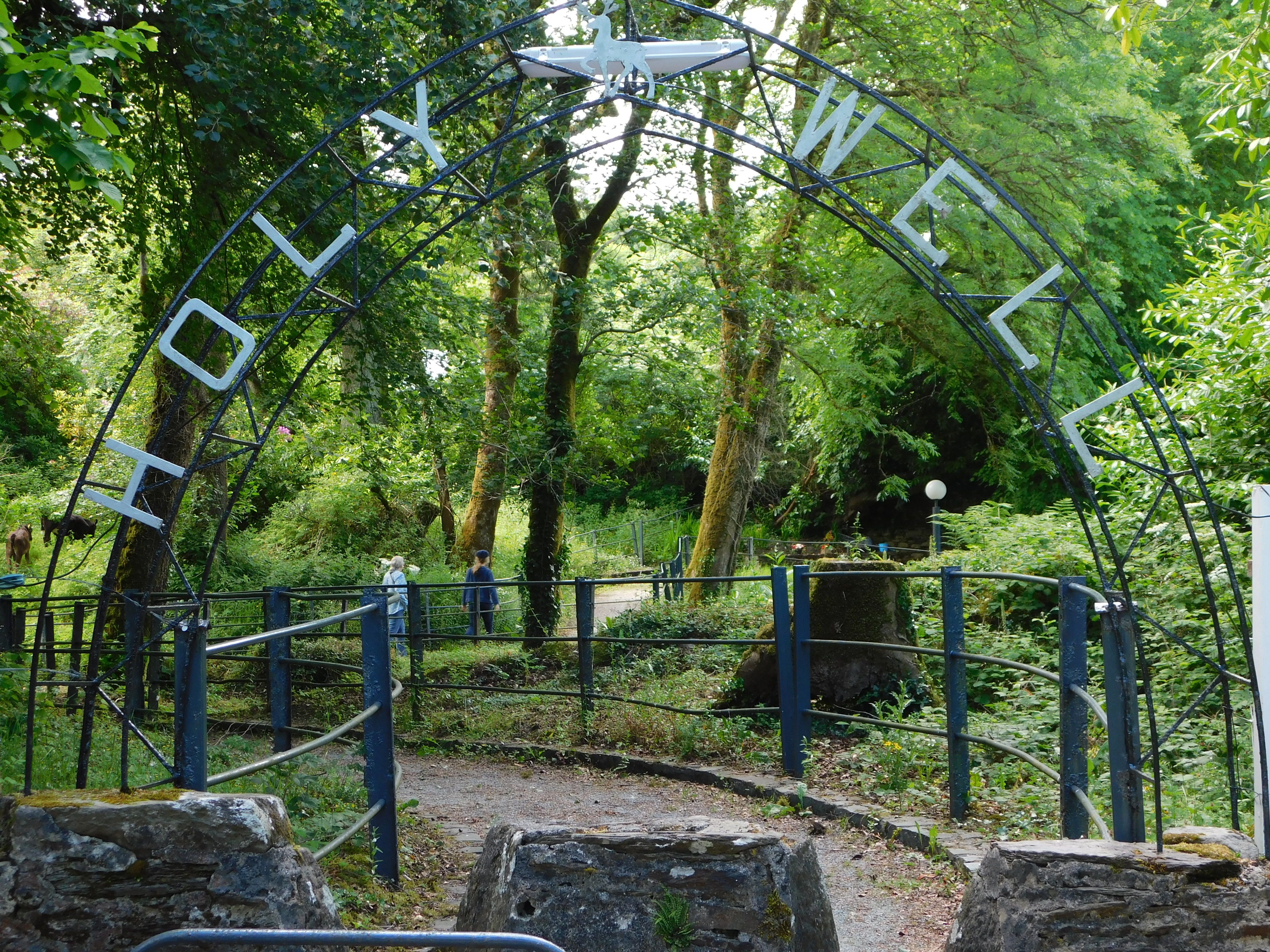 The beautiful and welcoming entrance to St. Gobnait’s Holy Well in Ballyvourney, County Cork.  This is one of four holy wells named after St. Gobnait who was born in County Clare in the sixth century.

Another excursion was to St. Gobnait’s Holy Well in Ballyvourney, Co. Cork.  There are as many as 3,000 holy wells in Ireland and during our previous trips, Kate collected water from at least a dozen holy wells.  One of those wells was St. Gobnait’s which drew us back due to its beautiful, secluded location and well-kept condition.  Holy wells are known as sources of inspiration, wisdom or healing.  Another view into the history of Christianity in Ireland. 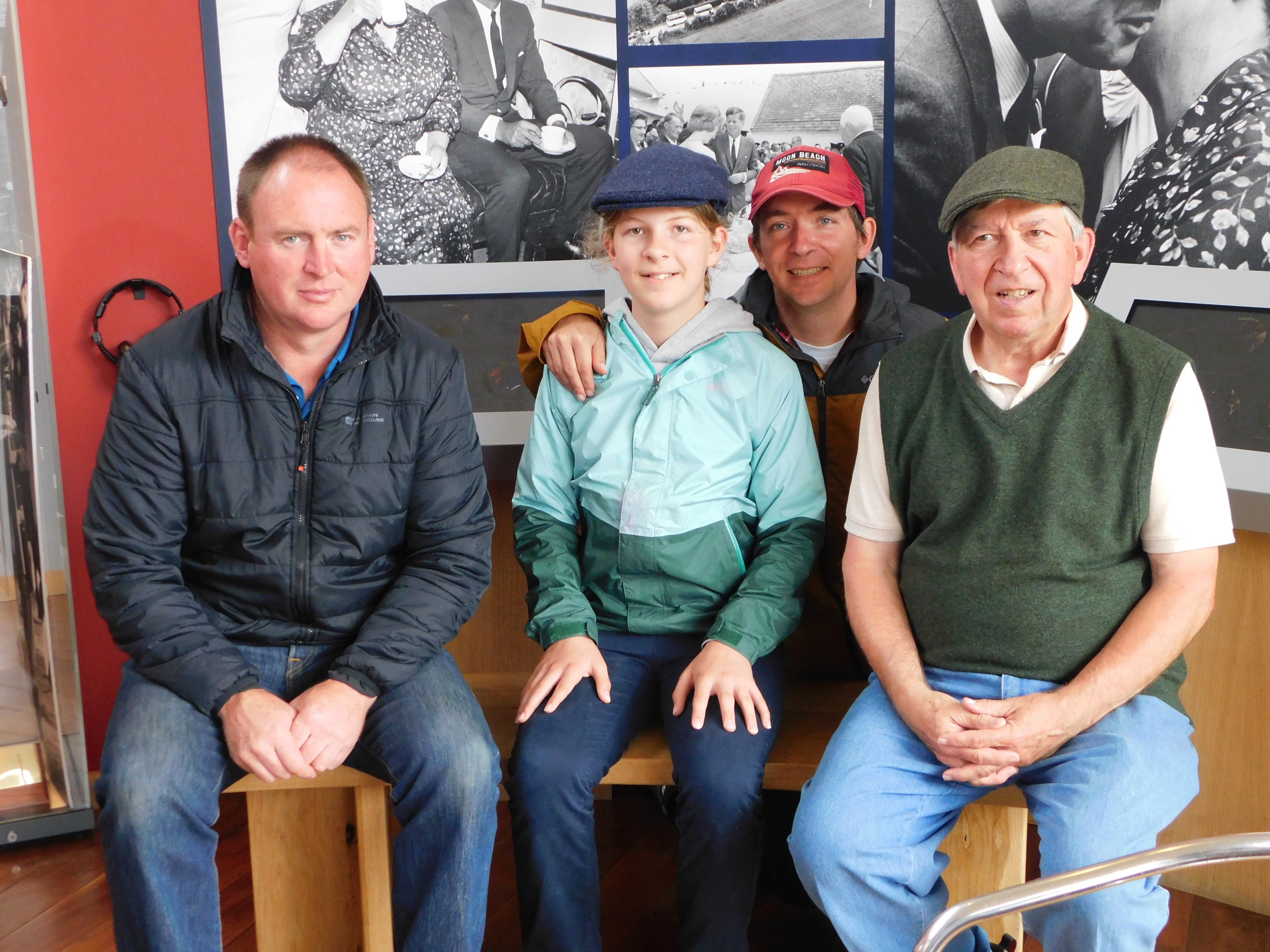 Four descendants of the Kennedys from Dunganstown, Co. Wexford.  Patrick Grennan (left) oversees the Kennedy Homestead and is a long lost cousin of Ben, Brian and Mike.

On Friday, June 24, our journey took us to the Kennedy Homestead in Dunganstown, County Wexford where we visited with Patrick Grennan who runs the farm and oversees the Visitor Centre.

A DNA shared match for Mike and Patrick Grennan confirmed Mike’s direct line ancestry to Dunganstown.  This was Mike and Kate’s third meeting with Mike’s long-lost cousin Patrick, but was the first time Brian, Rachael and Ben were immersed in the Kennedy family history. 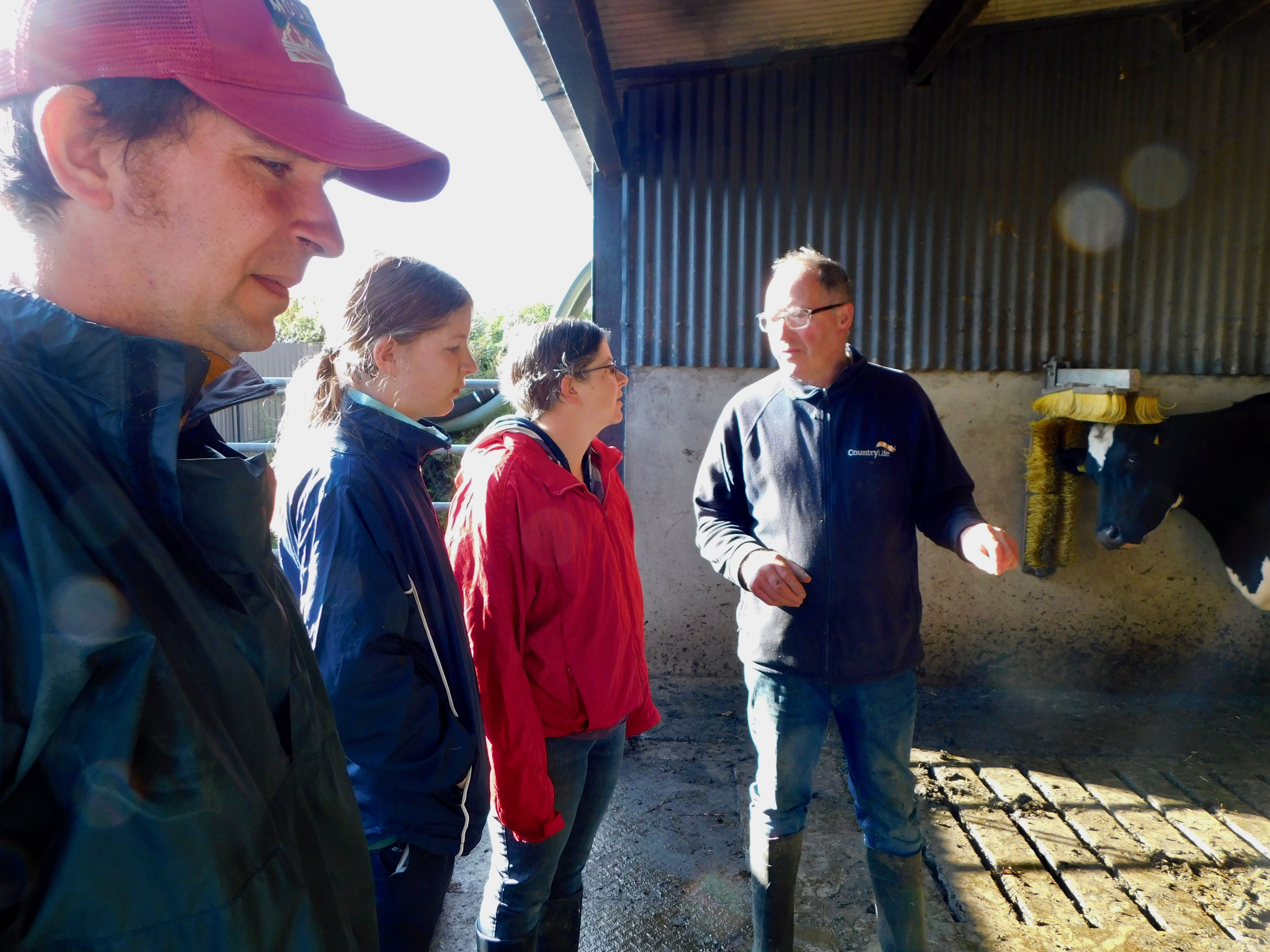 Jim Fitzpatrick provides Brian, Ben and Rachael with tips as they prepare to help Jim milk his fifty dairy cows.  Mike and Kate first stayed with Jim and his wife Brid at Glenraha B&B in 2011 and have become close friends from “across the pond.”

We spent two nights with our dear friends Brid and Jim Fitzpatrick at the Glenraha Farmhouse B&B in Co. Kilkenny.  This gave Brian, Rachael and Ben the most exciting opportunity to join Jim in the morning to help milk his dairy cows.  Milking the cows was followed by Brid’s delicious Irish breakfast, a visit to Mullinavat Falls, and a stop at the 12th Century Jerpoint Abbey in Thomastown.  All of that before spending most of the day touring the sites of the city of Kilkenny including Kilkenny Castle, the historic trolley ride and the Black Abbey with its famous stained glass windows.

Brid, Jim and their son James joined us for dinner in Kilkenny with a stop after dinner at the Mount Juliet Country Club where the recent Irish Open Golf tournament was held.  Another unbelievable day spent in Ireland! 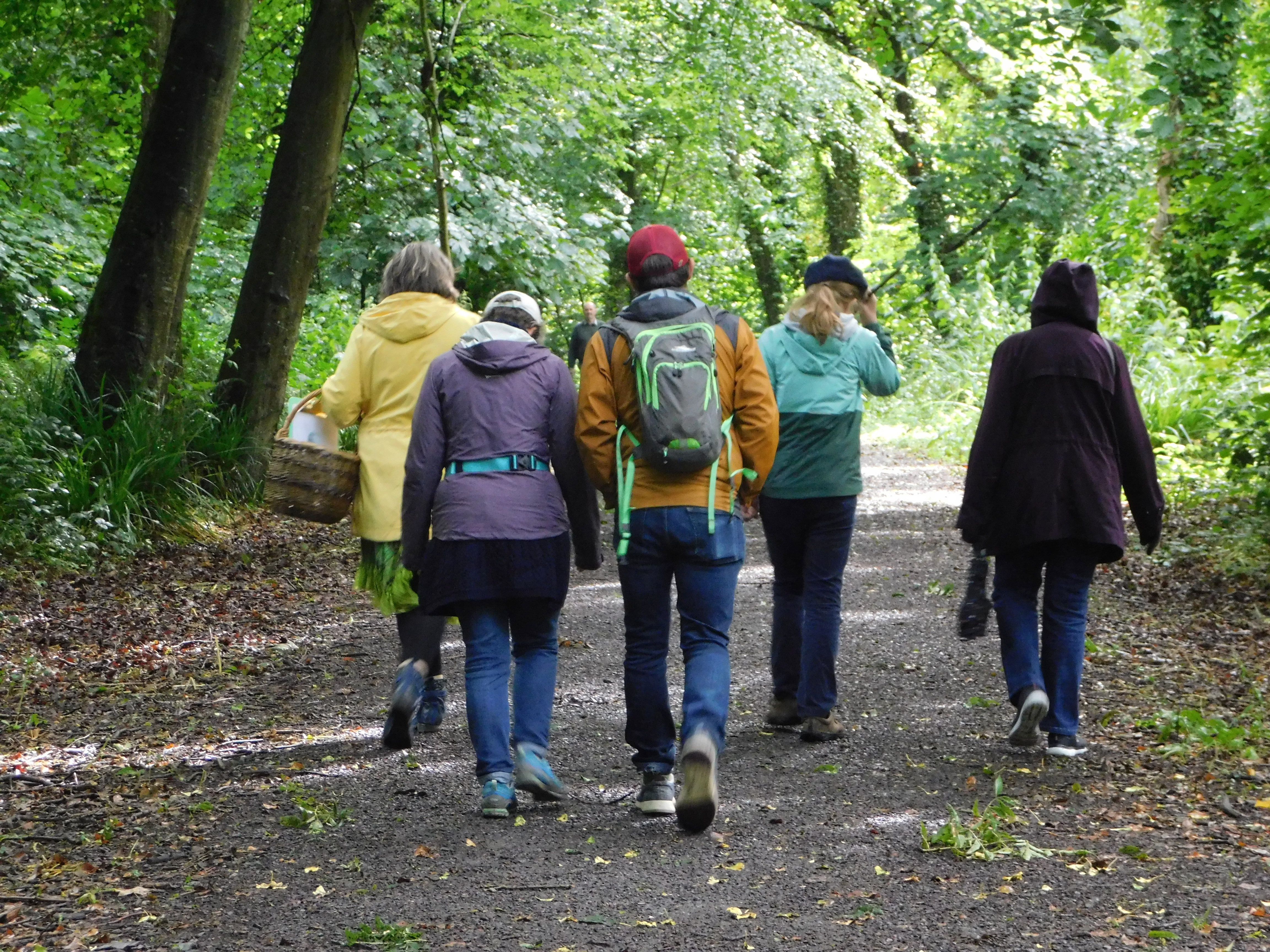 Lorraine (far left) leads the way on our Gallivanting Tour through the Courtown Woods near Gorey, Co. Wexford.  She gave us a wealth of information about foraging sprinkled with Irish folklore tales.

The next morning we stopped in Gorey, Co. Wexford for a wondrous tour led by Lorraine of Gallavanting Tours.  Lorraine provided a mountain of information about foraging in the woods, as well as a multitude of folklore stories about Ireland.  All of this while spending two and a half hours walking through the Courtown Woods.

From Gorey, we went to the Monastic Site in Glendalough, Co. Wicklow. This unforgettable site is at the top of a valley looking down to the Upper and Lower Glendalough lakes.  We also stopped at our favorite woolens and gifts shop in Laragh on our way to Enniskerry.

The evening ended by having Kate’s long-lost cousin James Byrne join us for dinner.  We have spent many days in the past touring the valleys and mountains around Enniskerry with James “chasing” Kate’s Byrne and McGuirk ancestors who emigrated from there during the famine years. 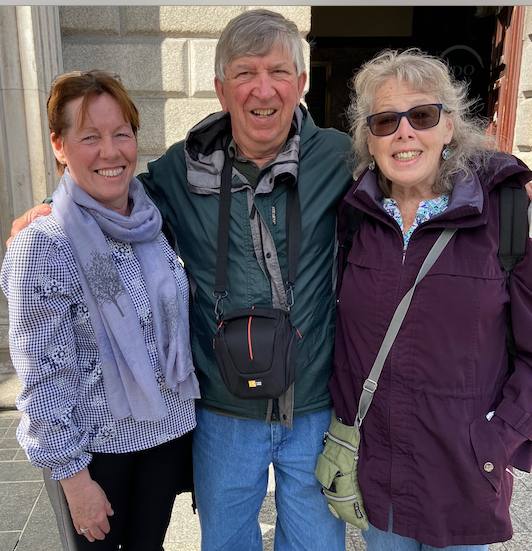 Eilish Feeley, genealogist friend and colleague, joined Kate and Mike to enjoy a “cuppa” in Dublin and catch up on the past three years.  Eilish’s genealogy business in Irish Clann Connections.

Dublin city was our destination for a full day.  Brian, Rachael and Ben visited Trinity College, and also took in the Book of Kells and adjoining historic library.  They spent hours in the National Museum of Ireland which houses an intact bog body along with a huge archaeological collection.  We spent our time in Dublin visiting with our dear friend and colleague Eilish Feeley who is a certified genealogist located near Roscommon Town.  Eilish has been the genealogy guide in Ireland for many of our clients for whom we have identified the home townland of their ancestors. 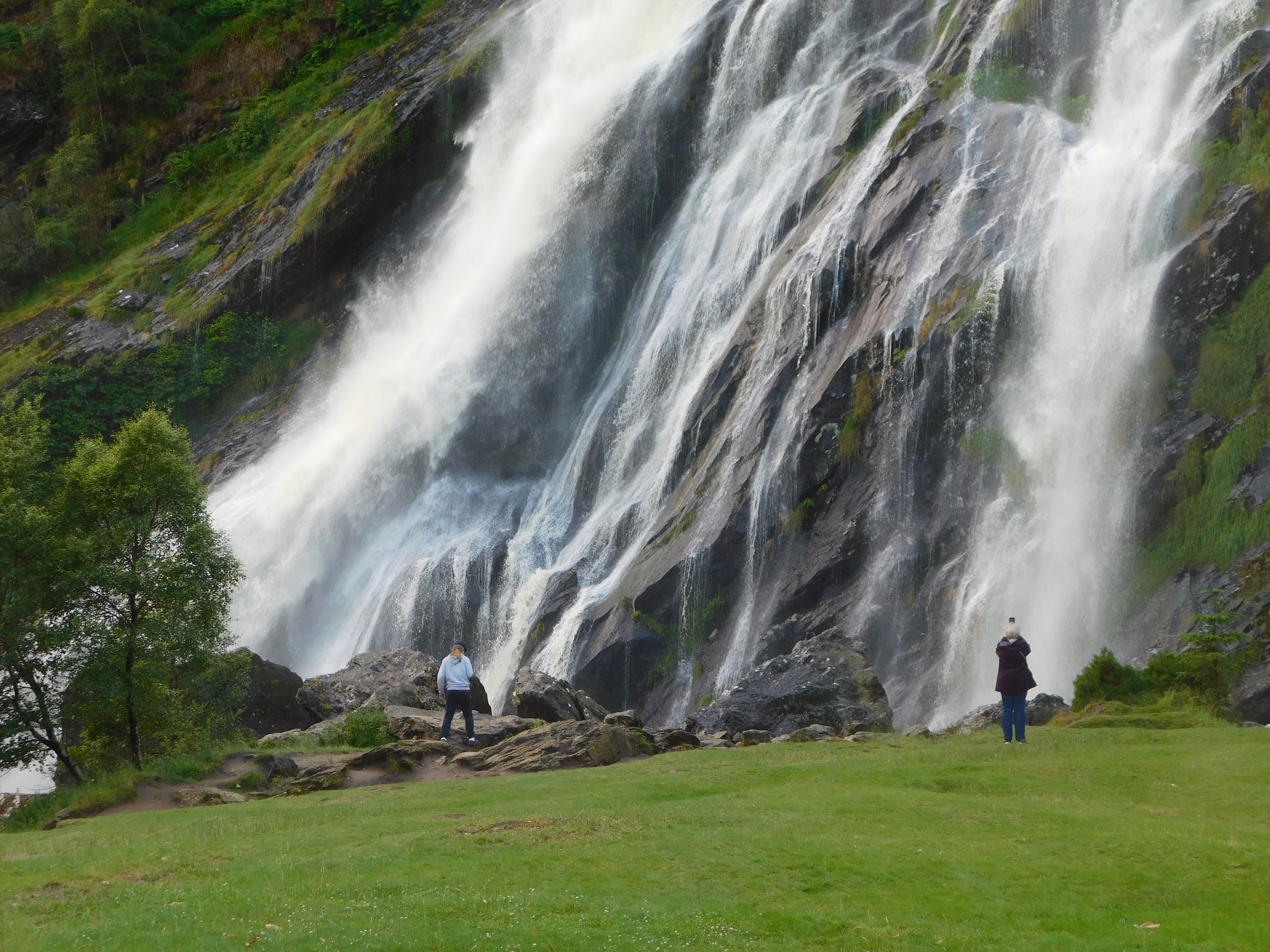 Our last evening in Ireland was spent at the base of the magnificient Powerscourt Waterfalls which is 127 meters (that’s 397 feet) and the highest waterfalls in Ireland.

On the last day of our trip, we spent a relaxing day at Coolakay B&B on the Powerscourt Falls Road while Brian, Rachael and Ben spent the day in Co. Meath where they toured both the Newgrange and Knowth passage tombs.  Another site on their must-visit list that we have visited on three of our previous trips.  That evening we all took in the most extraordinary Powerscourt Waterfalls following a night of heavy rains.  It was one of the highlights of our trip and a spectacular place to say goodbye to the Emerald Isle until we “return home again.”

* Kate and Mike Lancor live in Moultonborough, NH and enjoy “chasing” their own Irish ancestors as well as helping others “chase” theirs. They run a genealogy search business and can be reached by emailing [email protected], visiting their website at www.oldfriendsgenealogy.com, or on their Old Friends Genealogy Facebook page. They have traveled to Ireland ten times and especially enjoy “chasing” Irish ancestors for their clients. If you have “hit a brick wall” or simply don’t have time to “chase” your ancestors, then send them an email to see if they can help. 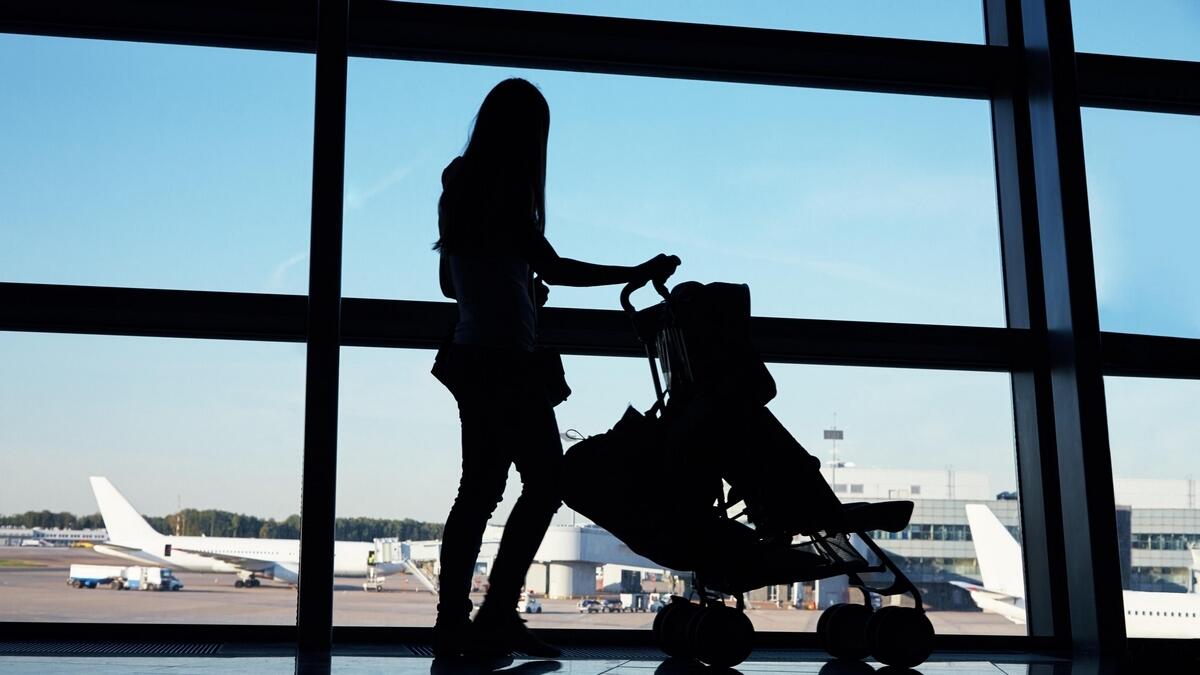