It has been a record summer for camping holidays this year, as domestic travellers embraced holidaying under canvas.

Uncertainty about foreign travel and a relaxation of campsite planning rules have combined to fuel a boom in tent holidays, with bookings for pitches and bell tents at the UK’s largest camping portal, Pitchup.com up 173 per cent compared to pre-pandemic. Unsurprisingly, the South-West, in particular Devon and Cornwall, has been the most popular region for campers.

Landowners have also taken advantage of an extension of rules that allow campsites to operate for 56 days per year without the need to apply for planning permission (double the number allowed pre-pandemic) which has increased the number of pitches available this summer.

Pop-up campsites have appeared around the country, in the grounds of stately homes, in pub gardens and on farms with “glamping” stock that would ordinarily do the summer festival rounds offered as holiday accommodation instead.

The Worthy View tents that provide pre-erected accommodation at Glastonbury Festival were brought out of storage for a family-friendly pop-up on the festival site throughout the summer.

Pitchup.com says that total UK spend on camping this summer was £87m, compared to £37m in 2019. Turnover was up by 95 per cent on 2019, with 1.6 million UK trips sold in the last year for tent, touring caravan and motorhome or campervan pitches.

Holiday park operator Haven noted that touring sales, which encompasses camping and self-drive motor homes, were up 42 per cent against the same period in 2019.

Travellers also paid more for pitches. In 2019, the average cost of bring-your-own accommodation (including tents, touring caravans, motorhomes and campervans) was £9.35 per person per night, rising to £10.04 in 2021.

With the return of warmer weather to much of the country this week, camping season is enjoying a summery extension. Despite the recent return of children to schools, Haven told i that it has “next to nothing” available for touring pitches this weekend.

However, some previously sold-out campsites across the country have space available, while others will be welcoming their final guests before closing their gates, hoping to capitalise on this year’s successful summer in 2022.

Last-minute camping getaways for this weekend

This western Cornish Farm isn’t far from a selection of beaches including Marazion, Sennen Cove, Porthcurno and Gwynver. All its tents have en-suite shower rooms as well as stunning views over a reservoir and the countryside beyond. Three nights in a canvas lodge arriving Friday is from £515 for six, featherdown.co.uk.

This is a quiet campsite (save for the bleating of its resident boer goats and dorper sheep) just outside Dorchester which allows dogs on its pitches, but not bell tents. There are showers and a washing up area, and farm-reared meat and eggs available to buy, thorncombefarm.co.uk

This is a family-friendly site of bell tents near Canterbury where you can enjoy the tranquillity of its rural location, or access Whistable and Herne Bay on the coast within 20 minutes. Bell tents come with a fire pit and barbecue, as well as beds inside. Two nights £195 for four, coolcamping.com

At the foot of the South Downs in Rodmell near Lewes, Sussex. There are five bell tents available this weekend, when the site closes for the summer season. Campers can buy fresh milk from the farm’s herd of Friesian cows and ice cream is also made on site. Two nights costs £210 for a tent sleeping six, southfarmrodmell.co.uk

Fully furnished bell tents with beds made up, and towels provided too. The two-acre glamping meadow has a mobile toilet block with a dedicated loo for each tent, shared shower facilities and communal kitchen. Or use the firepit and barbecue – each tent has its own set in a private area. Plenty of family fun to be had at nearby Pettitts Animal Adventure Park five minutes away, or Great Yarmouth 20 minutes away. Two nights costs £240 for a tent sleeping four, pitchup.com.

Surrounded on three sides by the River Waveney as it winds its way through the Broads National Park, Three Rivers is known for its water vessel rental shop, offering everything from rowing boats to Canadian canoes, kayaks and paddle boards. Teach your pooch to paddle board or take long walks in the nearby Norfolk Broads. Two nights on a wild camping pitch is from £70 for two sharing, threeriverscamping.co.uk.

A cluster of bell tents has popped up in the grounds of Belvoir Castle for the summer, overlooking the low hills of Nottinghamshire and Leicestershire. Inside are beds, rugs and lamps, while outside there are communal fire bowls and barbecues, as well as wet rooms, Two nights costs £425 for four, glampingly.co.uk

There are four pods and a bell tent at this site near Shrewsbury, each with its own deck, barbecue and picnic bench outside and beds and kitchenette inside. The Shropshire Hills are easily accessed for walks. Two nights costs £250 for four, bigbearlodge.co.uk

Bed down with up to 9 friends or family in a spacious and unusual stretch canvas safari tent, with three transparent sides to make the most of the surrounding nature. You’ll need to bring everything bar the tent, but the wildlife-spotting and stargazing opportunities are all part of the experience. Oak chip flooring makes for a truly back-to-nature stay, with the covered space offering plenty of room for beds, dining area and more. Shared amenity block on site has toilets, shower and dishwashing area plus a communal chill-out seating area. Two nights costs £300 for up to 10 sharing, pitchup.com.

Combine a stay on a working farm with the beautiful beaches of Northumberland staying at Feather Down’s Northumberland Farm. In the Northerumberland Coast AONB, less than a mile from the sweeping sandy beaches (almost all of them dog friendly) of the Northumbrian coastline and just a 15 minute walk into the pretty seaside village of Seahouses. Three nights in a canvas lodge arriving Friday is from £485 for six, featherdown.co.uk.

Tucked away in a forest clearing, just a mile from Thurstaston beach and half an hour’s drive from Chester, this site has all the ingredients for a magical family stay. Tents are well-spaced for peace and privacy, and come well-equipped with cooking kit and gas stove plus beds with linen. Shared composting/eco toilets and showers on site, plus farm nearby complete with cafe, gift shop and farm park. Two nights costs £200 per stay for two adults and three children sharing, pitchup.com.

Wasdale Campsite is near Wastwater England’s deepest lake, and Scafell Pike, England’s tallest mountain. Near the hamlet of Wasdale Head, the site is perfectly placed for tackling the Lake District’s highest fells and is great for cyclists and dog-walkers too. The Wasdale Head Inn is a 20 minute walk away for pub grub until 8pm each evening, while short drive away at Nether Wasdale are tow good pubs serving food, Screes Inn and Strands Inn. A two night pitch costs £66, nationaltrust.co.uk/holidays.

The luxury bell tents at Carrowmena Family Glamping Site offer breathtaking views of the Binevenagh Mountain on the North Coast of Ireland. The tents have electric plugs inside, an outdoor barbecue area and picnic table as well as a camp fire area, plus free Wi-Fi. An on-site activity centre has a climbing wall, abseiling, a maize maze, canoe and kayak hire and an archery range. Two nights in a River Roe Luxury Bell Tent is from £200 for four, carrowmena.co.uk/bell-tents.

Pitch up in a quiet corner of the sprawling Castle Ward estate, which was used as the set of Winterfell in Game of Thrones. The site is a gateway to spectacular walking trails for man, dog or Direwolf as they cut through ancient woodlands, landscaped gardens and sweeping parkland. Tent pitch from £44 for two nights arriving Friday, nationaltrust.org.uk/holidays.

Overlooking Hell’s Mouth beach on the Llyn Peninsula, this peaceful site has four bell tents, each with its own loo and sink but no furnishings inside, so you’ll need to bring bedding. The working farm on which it sits has a shop selling produce for the camp stove, too. Two nights costs £160 for eight, coolcamping.com.

Perched on the Pembrokeshire Coast Path, this 96 acre family-run dog friendly farm is situated overlooking Porthsele beach. The site is situated on the most western tip of Pembrokeshire, offering sweeping views of St George’s Channel. Perfect for active families (and their dogs) Whitesands beach is a short one-mile walk along the scenic coastline. Farm shop and coffee hut open daily on-site. internet access and shared shower and toilet block available. Pitch from £52 for two nights. Dogs (2 max.) £2 each per night, pitchup.com.

Minimum effect on the environment, maximum fun at this site on a family-run livery yard. The site runs on solar panels and wind turbines, with rainwater harvesting for showers. There’s plenty to do on site with space for games, visits to the resident Shetland ponies and wildlife spotting. Bell tents are unfurnished but do come with firepit and barbecue. Shared facilities for toilets and showers. Two nights costs £100 for four, pitchup.com.

This site is the perfect option for dog friendly, rural seclusion, especially if your dog loves the water.  Enjoy roomy pitches and first-rate views with great facilities including modernised shared shower and toilet blocks plus a fire pit and barbecue area. There are several beaches within walking distance, the closest being five minutes away and the island has a small grocery store for groceries, drinks and other essentials. Two hotels, a pub and a tearoom are all within walking distance for evenings where cooking won’t cut it. Tent pitches from £40 for two nights for two sharing, pitchup.com.

Tue Sep 14 , 2021
As the summer holiday crowds die down and the autumn swell picks up, September is a great month for a surf trip. Despite outside temperatures beginning to cool, the sea often stays warm well into October and November retaining the heat it absorbed throughout the summer. With the nights drawing […] 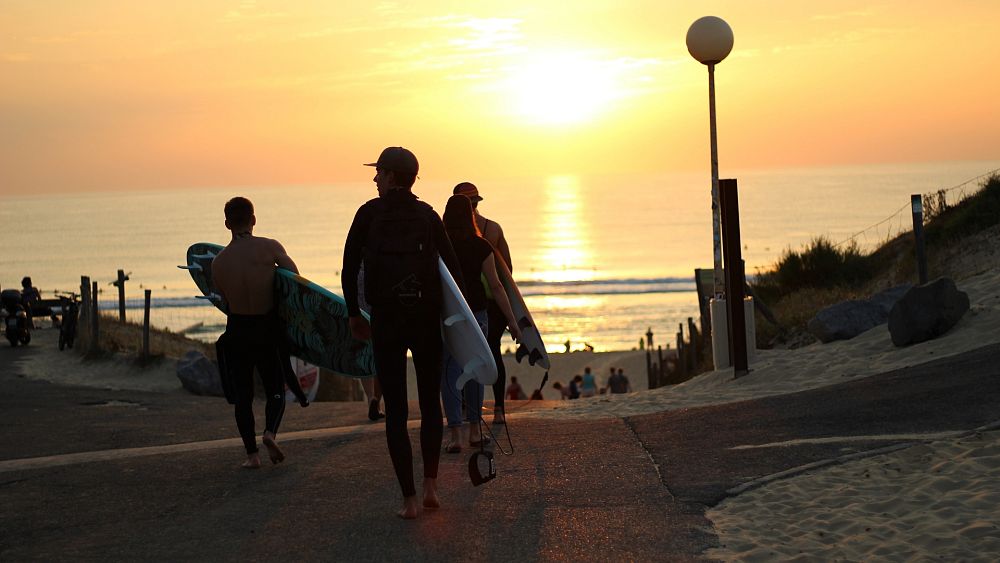