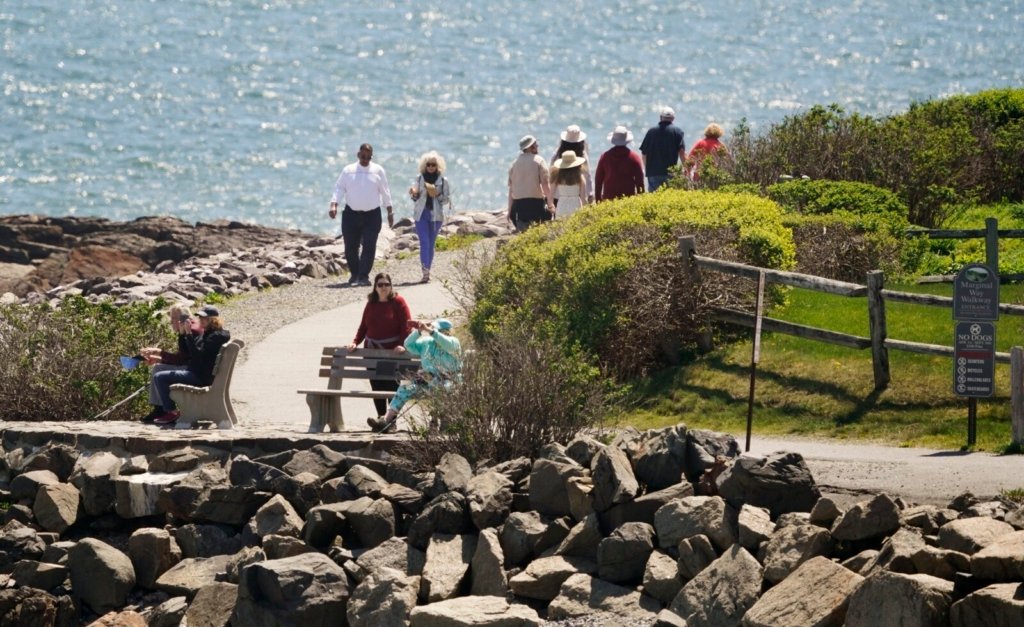 People walk along the Marginal Way in Ogunquit on May 12. The coastal walking path is popular with tourists and can get crowded during summer. Gregory Rec/Staff Photographer

Elizabeth Stearns and Jennifer Taylor kept a brisk pace on the Marginal Way in Ogunquit on a recent morning. Once a week, the sisters meet up from their respective homes in Yarmouth and Kennebunk to walk and talk, a tradition they started in 2020 to get out of the house during the pandemic.

This jaunt along the cliffs would probably be their last with an ocean breeze for a while, though.

They have the run of the beaches in the off-season, when parking spots are abundant and they don’t have to watch their step for sunbathers. They migrate inland during the summer, opting for quieter trails like the Saco Heath Preserve.

“I avoid Route 1 at all costs in the summertime,” Taylor said.

“We had to get down here before the crowds,” Stearns added.

With Memorial Day fast approaching, locals in Maine are enjoying the last stretch before the tourist season begins in earnest. The first signs of visitors are already here – “We’ve heard a lot of French,” Taylor noted – but there’s still time to snag a table at a hot spot before ceding the territory for the summer.

Tourism plays a huge part in the state’s economy. More than 15 million visitors came to Maine in 2021, a rebound from the year before but still a million less than before the pandemic. Locals might label their relationship status with tourists as “complicated.” It feels like a blissful honeymoon when summer spots take the winter boards off their windows and the out-of-state dollars start flowing, not so much when you’re stuck on Interstate 95 surrounded by what truly seem like 15 million out-of-state license plates.

Perhaps the pandemic has made even the longest lines more bearable, though. Distance makes the heart grow fonder, etc.

“It’s nice to think tourism is back,” Stearns said. “We’ll put up with it if it helps the economy.” (Taylor noted that she would be getting her Grape-Nut ice cream fix at Big Daddy’s in Wells as soon as possible, while the getting was still good.)

This month brought the first real streak of spring weather in southern Maine, and Old Orchard Beach was buzzing on a recent weekday. Allan Buotte was gearing up to run not just one but two businesses on the pier this summer. He and his wife, Tiffany, have long owned Pier Fries, and they recently purchased neighboring Bill’s Pizza. They started out May open on weekends and then headed into the first full week of the season. Right now, their customers are predominantly locals.

“We get the same families back year after year after year,” Buotte said. “They’ll come down the first bunch of weeks until the kids are out of school, and then they know the tourists are coming, and we might not see them until the fall. They get their fix early.”

Loyal locals are important to the business in the quieter months, he said, and he likes seeing the regulars he knows from years past.

And he knows they’ll probably stay away when the parking spots are all taken, but that’s OK. He’ll see them again at summer’s end, when he’s not too wiped to enjoy the calmer, cooler beach at the end of the day.

“We’ll bring our towel, and we’ll sit out there on the beach in our work clothes,” he said. “In the summertime, we don’t have a chance to do that.”

Paul and Johnna Dionne of Scarborough lucked out with what they called “the jackpot” on a sunny Friday afternoon in OOB: no line at Pier Fries. They sat on a bench nearby to enjoy their crinkle-cut box to share, a treat they enjoy every year around this time. 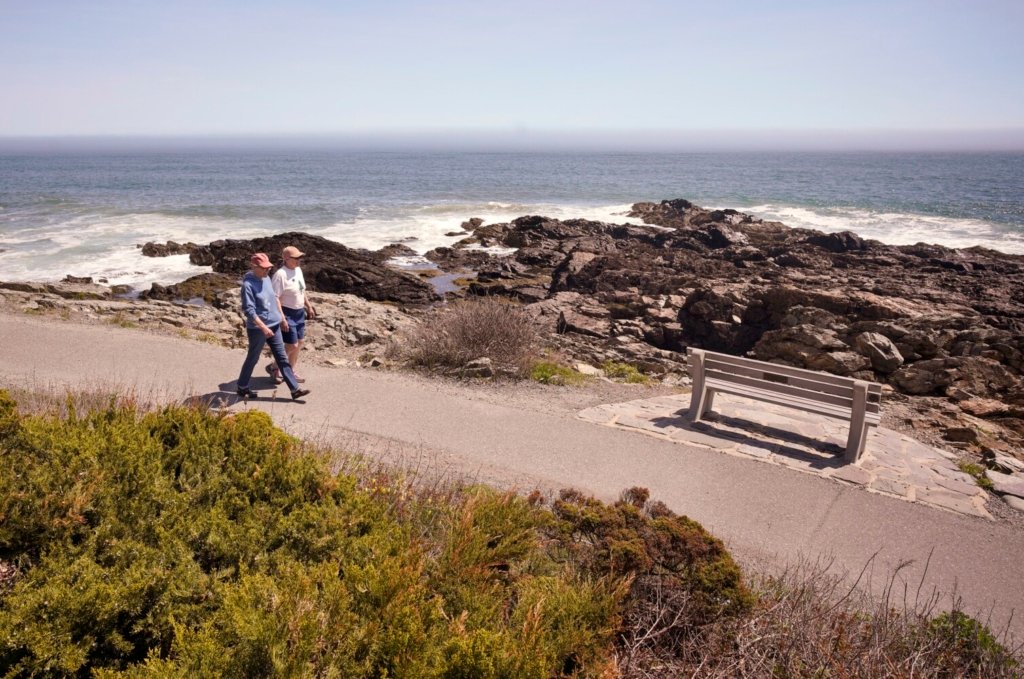 Elizabeth Stearns of Yarmouth, left, and her sister Jennifer Taylor of Kennebunk walk on the Marginal Way in Ogunquit on May 12. The sisters walk frequently and came to Marginal Way to walk it before tourist season to avoid the crowds. Gregory Rec/Staff Photographer

They’ve already noticed the uptick in traffic that tells them the busy season is coming. (“It’s not even Memorial Day weekend,” Johnna Dionne said, incredulous.) As part of a wedding band called Wavelength, they can’t avoid the roads to the destination towns in the summer. They just know to start adding an extra hour or more to their off-season travel times. Their work means summer weekends are spent on the stage, but they like to take their boat up the coast on warm weekdays off. They ticked off the names of favorite places they want to visit soon – McSeagull’s in Boothbay Harbor, Dolphin Marina & Restaurant in Harpswell.

Steven and Isabel Abrams normally spend the summer in Maine and the winter in Florida. This year, they extended their summer rental in Old Orchard Beach and stayed put in Maine because Isabel broke her ankle right before they were scheduled to leave in November. They walked their dog Buster on the pier and reminisced about the bygone fixtures of Steven’s childhood here. Dave the Guesser isn’t there anymore, but they’ll still visit Palace Playland for arcade games.

“Before it gets too crowded, we’ll go kill some zombies,” Isabel Abrams said with a laugh.

The beach was not yet packed, but colorful towels dotted the sand and pop songs blasted on a portable speaker. A group of college students celebrated the end of their semester with a heated game of Spikeball. They will still come to this spot in the summer, although they might not have room they do now to leap for a critical save.

Sand square footage is one way to measure the approach of summer. The number of chocolate sea salt doughnuts at Holy Donut on Portland’s Commercial Street is another. Supervisor Tiana Lauziere said the downtown destination has already sold out a couple of weekends this spring.

“One weekend into the summer, it’ll be an everyday thing,” Lauziere said.

She said come summer, locals tend to frequent the other Holy Donut locations on Park Avenue in Portland or even Route 1 in Scarborough. But even those stores will soon be hearing from visitors trying to chase down the last doughnut. On a nice spring day, Lauziere might visit Mexicali Blues or another Old Port shop after her shift. But when her case is wiped out in the summer, she’ll head straight home instead of fighting the crowds.

“I try to avoid the downtown area when it’s busier,” she said. “I find it difficult and pricey to park.”

Brian Chick and Poppy Chumchop took Tuesday off to enjoy a day together in the city. All the window seats at Eventide will be claimed in a few weeks, but they easily got two open stools and a view of the passers-by for their lunch date. Chick lives in Cumberland now, but he spent two years in Bar Harbor and knows the tourist season well. Chumchop is from Thailand and has lived in the state for less than a year, and she is still eager to explore the quintessential Maine spots.

“I want to go to a lobster place,” she said.

“We should go soon,” he replied.

Sometimes, you just have to go with the flow, even when it moves at the speed of I-95 on a Sunday afternoon in August. Caitlin Blackman was a tourist in Maine before she became a resident. She moved from San Diego to North Yarmouth in 2020. Especially after the quiet streets of the early pandemic, she doesn’t mind the influx of out-of-towners.

In fact, she was in downtown Portland with one on a recent Tuesday. Her friend Mat Freistadt was visiting the Northeast from Chicago. A chef, Freistadt was on a food pilgrimage and chose Eventide as their lunch spot after he saw it on a Condé Nast Traveler list. They slurped oysters and sipped drinks at a sunny outdoor table, while dogs Jackson and April May waited patiently for a post-lunch walk on the Eastern Promenade.

“It’s difficult to get a brunch reservation in the middle of the summer, but I think it’s mostly a happy relationship,” Blackman said of tourists.

And sometimes the swell of people is just what gives you the summer vibe.

“We’ll go down to Old Orchard Beach,” she said. “But you want that to be packed.” 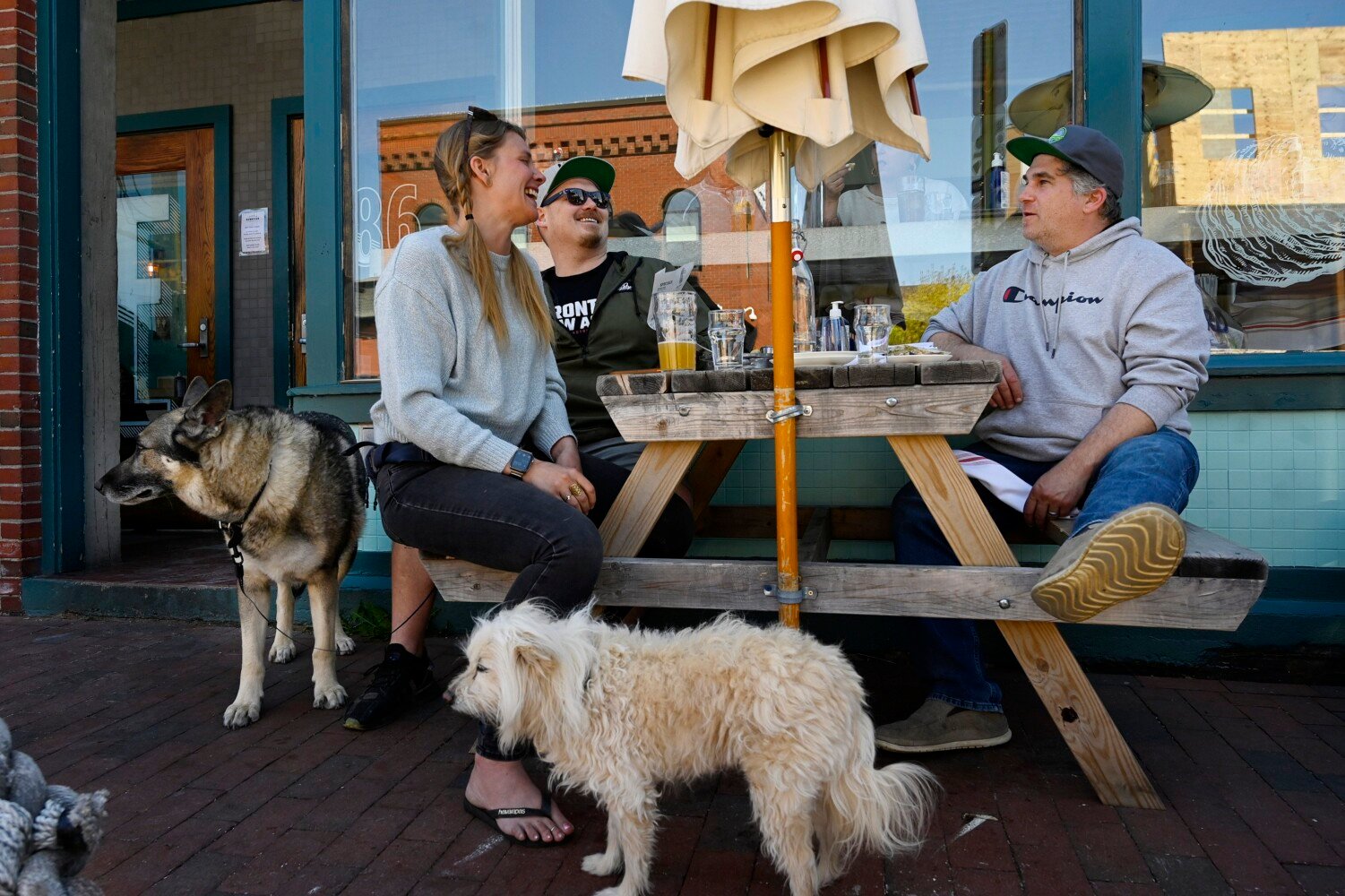 If you Google “things to do in Portland, Maine,” you’ll find that the top hit on TripAdvisor is Allagash Brewing Company. But sales director Naomi Neville said they still see locals during the summer, probably because their location on Industrial Way is off the peninsula and away from the downtown hubbub. Still, as many as 1,000 people can pass through the outdoor tasting room in the course of a busy summer Saturday.

“It’s fun when you work the host stand and you see everybody’s IDs and where they’re from,” she said.

For her part, Neville said, she will find a way to get downtown during tourist season if it means making a stop at Portland Lobster Company on Commercial Street.

“You go down and get an Allagash White and that’s a kickoff to summer,” she said. “I use more Lyfts and Ubers or cabs in the summer. It doesn’t put me off going downtown. I just get there in different ways.”

On Mackworth Island in Falmouth, the little parking lot still had open spaces on a recent sunny afternoon, a sight that will be just a dream in a few weeks. Jennifer James walked 12-week-old puppy Hudson on the island path, coaxing him through meetings with other dogs and rewarding him with treats. Her family moved from Philadelphia to Falmouth in 2020 for work, so she still feels like she hasn’t seen Maine’s tourist season in full swing.

“I’ve never seen the cruise ship drop off or anything,” she said. “Maybe I’m in a for a rude awakening.”

They’ve still found more obscure beaches (not to be named here) for those July Saturdays – or better yet, weekdays. But one spot that for James is always worth the crowd is the Bite Into Maine truck at Fort Williams in Cape Elizabeth. Her husband gets the job of standing in line for lobster rolls. Tourist trap or not, it’s a favorite place to enjoy with their two young daughters or show off to visitors.

“What I didn’t realize when I moved here was how much people would want to visit us here,” James said.

And some visitors are savvy, too.

When Jessica Solup picked up Holy Donuts on Commercial Street on a recent morning, she had her pick of flavors, instead of the emptied display case that might have greeted her in a few weeks. Solup came to Maine from Massachusetts for her annual Mother’s Day getaway with her mom. They stayed in Cape Elizabeth and visited their usual spots, including Portland Head Light.

“We like doing it before busy season,” she said.

Please check your email to confirm and complete your registration.

Use the form below to reset your password. When you’ve submitted your account email, we will send an email with a reset code.

As energy prices rise, thousands of Mainers at risk of losing power

Shop these travel bags that are on sale now

Wed May 25 , 2022
Woman packing a suitcase for a trip. (PHOTO: Getty Images) Despite how the pandemic continues to rage on in other parts of the world, many Asian countries and cities have now opened up, allowing for international travel. Filipino celebrities like , Solenn Heussaff, and Julia Barretto have all taken trips […] 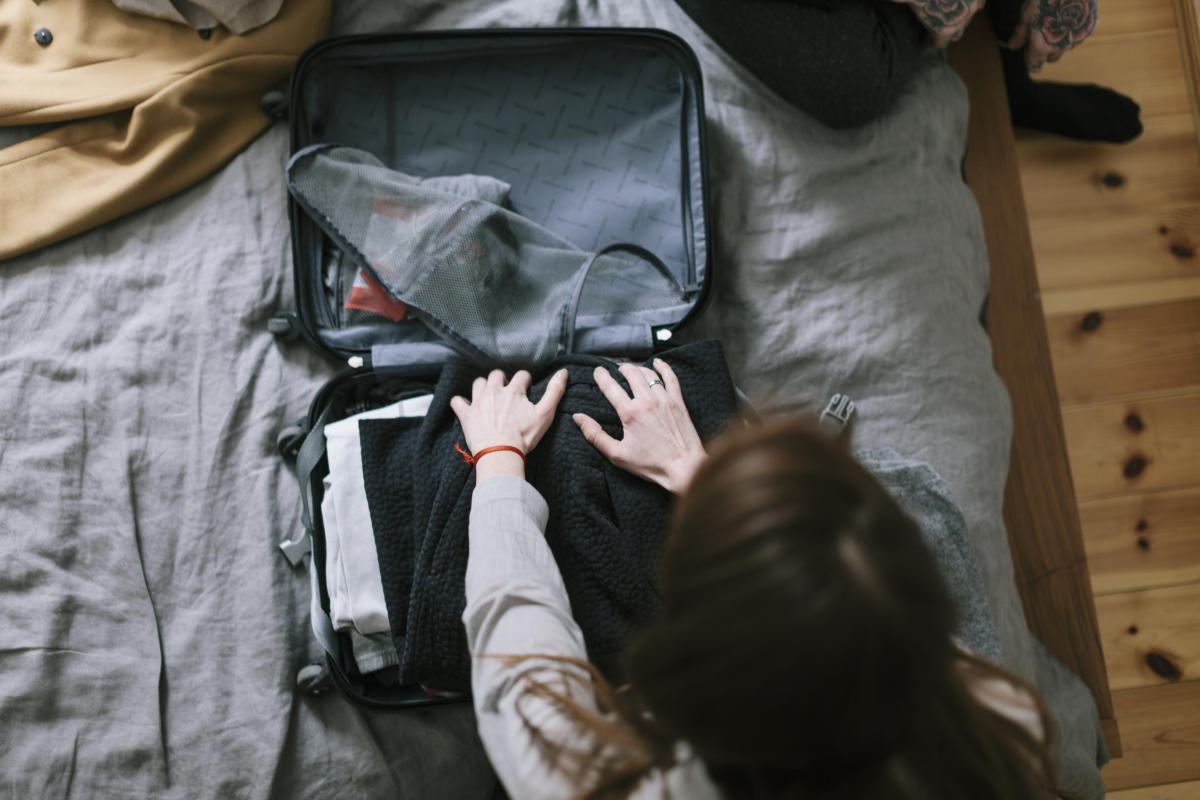