The pandemic was difficult for many small business owners, but it was especially difficult for Ryan Graveface, the owner and proprietor of a museum in Savannah, Ga., devoted to cults, the occult and true crime.

The Graveface Museum opened its doors on Valentine’s Day 2020. Just three weeks later, a statewide shutdown ordinance forced it to close indefinitely. “A lot of places got funding from the government that kept them afloat,” said Graveface, 40. “But I didn’t get a penny. I guess a museum about serial killers isn’t considered an ‘essential service.’ ”

For four months, Graveface’s house of horrors, located in the heart of Savannah’s tourist district, sat empty. He finally managed to reopen that summer, but crowds weren’t exactly lining up to see eerie oddities like Charles Mansion’s sweatpants, packets of Flavor-Aid taken from the scene of the Jonestown cult mass suicide, or the actual spine of Church of Satan founder Anton LaVey.

Last December, things were so grim that Graveface considered closing for good. “I had a heart-to-heart with my wife,” he said. “I told her, ‘I know I spent nearly four years of my life and $200,000 building this thing, but I think I’m done. This just isn’t working.’ ”

But then something remarkable happened. In January 2021, a TikTok user named Blair Bathory posted a 30-second video of her visit to the museum.

“It went viral,” Graveface said. “It got something like 4 million views. It’s getting shared all over the place. And then all of a sudden, we have a line out the door every day.”

Over the next few months, more visitors shared their walk-through videos to TikTok, which were shared millions of times, and more people across the country were inspired to take the journey south to see the quirky museum — a business that should’ve been the least likely to survive a global pandemic.

They included people like Kelli Brink, 44, a true crime podcaster from Cedar Rapids, Iowa, who said the museum’s spooky appeal was an especially welcome diversion from “the genuine terrors of super-viruses, politics and war.”

“In the midst of a pandemic, normal life seems so scary as it is,” Elam told The Post. “Something like circus freaks and serial killers is so surreal and otherworldly that it takes you away from all of the worries of mundane normal life.”

Plus, he adds, “It’s not every day I get to see John Wayne Gacy’s tax returns.”

“Surreal” is an apt word to describe the Graveface Museum. Spanning two floors of an old tobacco warehouse, the collection includes plenty of artifacts that are creepy merely because somebody thought to preserve them for posterity, like the keys to Gacy’s crawl space where he buried his victims, the prison underwear of serial killer Aileen Wuornos (the serial killer portrayed by Charlize Theron in the 2003 film “Monster”) and the wooden sign from California’s Spahn Ranch — which the Manson Family called home.

Nobody is more surprised by the attention than Graveface, who was well aware of the challenges his museum would face even in a normal year.

“Savannah is a sleepy tourist town,” he says. “It attracts old people, and old people are not our demo. We can’t pull from the visitor center. We’re not that sort of place.”

Instead, he gets visitors who wouldn’t otherwise set foot in this historic city. “I literally hear it every day,” Graveface said. “They’re like, ‘We came from Miami, and we’re leaving immediately because I’ve got to work tomorrow.’ ”

Earlier this month, Graveface welcomed guests who’d traveled 15 hours from Boston. “I was like, ‘That’s cool. Where else are you going on your road trip?’ And they were like, ‘No, you don’t understand. This is it. This is the road trip.’ ”

Graveface began collecting — or “hoarding,” as he prefers to call it — when he was just 8 years old. Born and raised in Toledo, Ohio, the son of an engineer and a paralegal, his obsession began with Garbage Pail Kids cards, which soon evolved to more sinister interests when he learned that Stephen King’s Pennywise character from “It” was inspired by John Wayne Gacy.

Graveface (who was born Ryan Manon and changed his name more than a decade ago after it came to him in a dream) purchased his first Gacy painting when he was just 15 years old. As part of a high school psychology project, he wrote to “four or five” serial killers on death row.

“My family has a long history of weirdos, mostly ending in suicides,” he said. “It made me want to learn about the psychology behind that.”

Many of the convicted killers wrote back, and their responses “were very normal, very human,” he recalled. “As a kid, you expect them to be these ghoulish monsters. I’m not suggesting they’re good people. But the way they communicate is exactly the way you and I are talking right now, except they’ve done horrible things.”

It was a fascination that followed Graveface as he traveled the world, bouncing between Spain and Chicago, before finally settling in Savannah in 2010, where he opened a record store and record label. By then, his growing collection of creepy artifacts filled a 5,000-square-foot storage space.

“I didn’t adorn the walls of my record store with Beatles posters,” he said. “I put up a bunch of Gacy’s Pogo the Clown paintings.”

He eventually decided to open a museum, finding a space in the summer of 2018 that was “big and cheap,” he said. It also came with its own demons. While renovating it for the grand opening, he discovered a secret compartment with an unmarked vinyl record. It contained voices chanting and speaking in tongues. It was, Graveface said, “horrifying.”

The opening was delayed when he and his wife Chloe — who created much of the animal taxidermy displayed in the museum — decided the entrance should be a giant Satan face built with chicken wire and papier-mâché.

“We wanted it to be like a traditional sideshow mouth to get into the museum,” he said. “The city heard about it and gave us a citation because it’s such a large structure and I didn’t have a permit for it.”

By the time Graveface had raised enough capital for all the opening costs, thanks in large part to an Indiegogo fundraising campaign, the pandemic was on the horizon, ready to topple his best-laid plans.

But not only has it survived, the museum is thriving. In a town where tourism is still recovering, Graveface has had to hire more staff to make sure they can meet the demand.

He has big ambitions for the holiday season. He hopes to unveil a “Nasty ’90s” exhibit, a tribute to what he calls “the weirdest f–king decade.” In his collection, much of which has remained in storage for years, he has chilling artifacts from the likes of O.J. Simpson, Tonya Harding, John Wayne Bobbitt and Ted Kaczynski, the Unabomber.

Exactly what those artifacts might be, he’s not willing to reveal just yet.

“I want to keep that a mystery,” he said. “But let’s just say I’ve got some s–t that will blow peoples’ minds.”

How he’s accumulated such a treasure trove of curiosities isn’t as much of a mystery. It’s been a combination of tenacity and being in the right place at the right time. Graveface has deep contacts in the true crime collecting world, and he isn’t shy about reaching out directly to death row inmates or their survivors.

Sometimes, however, the best finds have just fallen into his lap.

Graveface mentions a collector — he won’t share his name — who once shipped him, at no charge, a box full of evidence from the 1957 case of Ed Gein, the infamous serial killer who inspired horror films like “Psycho,” “The Texas Chainsaw Massacre” and “Silence of the Lambs.”

“He was like, ‘Hey, I don’t know if you’re into Gein at all, but I’ve got a bunch of stuff,” Graveface remembered. “And I get this package that’s literally the best thing I’ve ever gotten in the mail.”

In the box were pieces of evidence from Joe Wilimovsky, the Wisconsin investigator who got Gein to confess. It includes grisly photos from Gein’s home, as well as a bag of human remains — they look like bones — which may have been from one of his victims or perhaps from one of the graves that Gein desecrated. (Graveface also displays what he claims is his own great-grandfather’s skeleton in a casket, other human skulls and jars filled with cremated ashes.)

Surprisingly, Graveface does have limits. He no longer displays anything from serial killer Ted Bundy.

“I had a few things from Bundy in the museum for awhile,” he said. “But we kept having women — always blondes, always in their mid-20s — who would stand in front of it and . . . how can I say this in a G-rated way? Pleasure themselves.”

That was too much for Graveface. “I took it all down,” he said. “The letters, the sketches, they’re all under my bathroom sink.”

But most of the museum’s visitors are “sweethearts,” he said. They tend to be young and interested in the museum for the “right reasons.” Meaning they’re curious about the history of these horrific events and not the “shock and awe” aesthetics offered by their biggest competitor, the Museum of Death in Hollywood.

“Some people finish the tour and they’re like, ‘This wasn’t scary,’ ” Graveface said. “And I’m like, ‘I didn’t say it’s a scary museum.’ They’re disappointed because they think it’s gonna be a haunted house.”

But more than a few visitors have claimed that the dolls — part of a “haunted dolls” exhibit — have turned their heads and stared directly at them. Graveface believes them but said, “I don’t want people coming here thinking they’ll see something like that.”

And then he added, with a sinister smile, “If it’s gonna happen, I’d rather it happen organically.”

Tue Nov 2 , 2021
Which car seat travel bags are best?  Traveling with a child can come with some stressful moments if you are not prepared. One thing you might not think about while packing is how you will transport the car seat. Different modes of transportation have different rules, but regardless, a travel […] 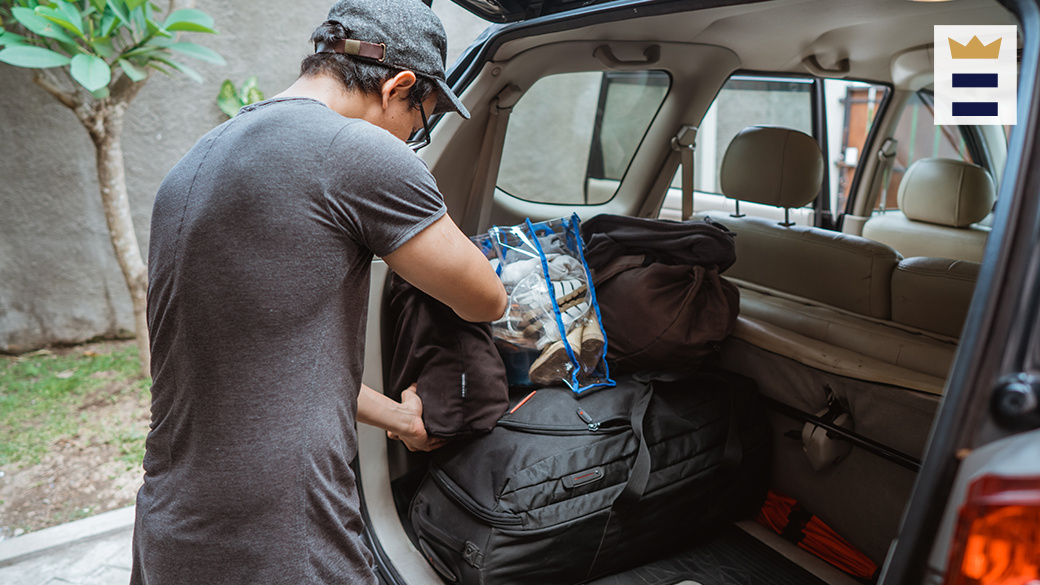