With summer travel heating up (pun intended), it’s logical to start thinking about how best to share your adventures with friends and family back home. Whether it’s a long road trip, a visit to a National Park or three or even just a weekend getaway upstate, the right camera for the adventure can help you preserve the memories.

You don’t, as you might expect, have to spend a fortune to get the right camera. I’m a travel photographer and I even end up using my phone (gasp!) sometimes to get a quick shot. The key is knowing how to use the camera, regardless of its price.

Here are a few options at different prices. One of these should fit your trip and budget perfectly.

The best camera you already have with you

Believe it or not, your phone might be all you need. If you know it’s not, feel free to keep reading. But honestly, modern mid- and high-end phones take excellent photos and videos. Or at least, take excellent photos of a certain kind. The majority of phones have fairly wide angle lenses, so you can take great group shots and landscapes, but that far off bison is going to look really tiny.

For most people, and in most situations, though, a phone really is all you’ll need. Get to know a few basics about how it works (tap the screen to change the exposure!), and you’ll be good to go.

If you’ve got an older phone and you’re not happy with the pictures it takes, but you aren’t sure if you want to spend money on a dedicated camera, consider a new phone. I’m partial to Google Pixels myself, but CNET has lots of Android and Apple recommendations.

Add-on lenses for your phone aren’t a substitute for a real camera, and even in the best case could reduce the quality of the image. However, they will let you get photos that otherwise wouldn’t be possible with just the phone’s camera and its built-in lenses. So a slight reduction in quality, which may or may not be noticeable when posted to social media, could be worth it.

The idea of these is you mount an additional lens on top of your phone camera. Together they act as if you had an entirely different phone camera.

CNET checked out Moment lenses a few years ago, and their current 58mm telephoto lens is what I’d recommend checking out. This won’t get you quite as close to the action as a “real” telephoto lens, nor does it offer the reach of the telephoto cameras on some highest-end phones. However, it will get you a lot closer to the action than the wide main camera on most phones.

There are wide angle versions of these add-on lenses too. I love a good wide angle lens, but most phone cameras have a panorama mode that will do the same for free, at least for photos. That method won’t work for videos. So if you want an additional lens, go for it, but I think for most people the tele will get you photos not otherwise possible.

Keep in mind that you’ll also need to get one of Moment’s phone cases to connect the lens.

The latest GoPro can record 5.3K video at 60 frames per second, for ultradetailed, ultrasmooth videos. It can also take 23MP pictures. Even better, it’s rugged, easy to use and waterproof to a depth of 33 feet.

There are also an infinite number of mounts and accessories available not just online, but at hotel gift shops, dive centers, electronic stores — really pretty much everywhere. So if you lose a battery or want a new mount, they’re easy to find.

The only downside, other than the price, is its wide-angle lens. So you won’t get those cool up-close images of wildlife or anything in the distance. For most adventures this is fine, but going on safari, or hiking where there’s lots of cool wild animals, the footage might not be as compelling as if you had a real camera with a zoom. More on those below.

Read our review of the GoPro Hero 10 Black.

The Hero 8 was GoPro’s main model in 2019. It’s an excellent camera, just not as cutting-edge as the Hero 10. It’s “only” capable of 4K at 60fps, so videos won’t be quite as sharp, and the battery is smaller.

That said, for most people this is probably plenty of camera for all the reasons the Hero 10 is good, minus several hundred dollars.

Read our review of the GoPro Hero 8 Black.

For certain types of photos, you actually do need a real camera. There’s only so far you can “zoom in” with a standard phone camera. Fortunately, even inexpensive point-and-shoot cameras typically have some amount of optical zoom.

And optical zoom is what you want — don’t be fooled by any “digital zoom” spec. Digital zoom is not a zoom at all. It’s merely cropping the photo and then scaling it up. You can’t “zoom and enhance” with your device, despite what every movie and TV show would lead you to believe. At least, not with any quality.

Because cameras overall have become less popular, and more specialized, since the advent of the “cameraphone” there are fewer inexpensive options. Expect to pay somewhere between the cost of a GoPro and a big interchangeable lens camera. Most also shoot video, so you don’t also need a GoPro unless you were specifically doing action-y sports, anything in or around water, that kind of thing.

I like the Sony ZV-1 as it’s small enough to fit in your pocket, has a reasonable zoom (70mm equivalent), and has a screen that can pivot out so you can see yourself. If you want something with a bit more zoom, the Canon G7X Mark III offers similar features, with a 100mm equivalent lens. There are a lot of options, but if you start considering cameras over $1,000 it’s worth considering an interchangeable lens camera instead.

If you really want to go all-out, at the top of the camera food chain are interchangeable lens cameras. Historically, these were called SLRs or DSLRs, but increasingly the top-end cameras are what’s called “mirrorless,” in that they lack the mirror found in all SLR/DSLRs. This allows them to be more compact, along with some other features we don’t have space to discuss. Suffice it to say, interchangeable lens mirrorless cameras are the future, DSLRs are on their way out.

The main benefit of both, though, is the ability to use a variety of lenses. Want a superzoom lens that has a wide angle and telephoto in one package? Lots of options. Want an ultrasharp prime lens? Tons. Want an epic telephoto to see the hair on a llama’s back at 1 mile? Lots of those, too.

Generally you can think of these cameras in two categories: full frame, and crop. Full frame cameras are called that as their image sensors are the same size as 35mm film. Crop sensors are smaller. The difference, for most people, isn’t huge. There are more lens options and usually better picture quality with full frame cameras, but they’re also more expensive. For beginners, crop cameras are just fine. I used one professionally for years, though last year I upgraded to a Canon R6 and I’m glad I did. Unless you absolutely know what you’re doing, don’t spend thousands of dollars on any camera.

At the entry-level end of the spectrum, and since I’m a Canon guy, there’s the EOS Rebel T8i. It takes 24.1MP photos, 4K24 video and has a swing-out screen. More importantly, you’ll have a huge range of lenses available once you learn how to use the camera and figure out what you want. In the meantime, the kit linked there comes with two basic lenses, one wide zoom and one telephoto zoom. It also comes with what is almost certainly a bad tripod, some filters and a bunch of questionably-useful-in-the-long-term accessories. But as a starter pack, it’s great. If this specific kit disappears, there are always a bunch of options on Amazon, just look for one that has both the 18-55mm wide zoom and the 75-300mm telephoto kit lenses.

Wed Jul 20 , 2022
THERE’S something romantic about a night under canvas in the great outdoors. And more people than ever seem to agree as 4.5million holiday-makers across the UK tried camping or caravanning for the first time in the last three years. 5 Camping holidays are enjoying a boom 5 Wild Camping on […] 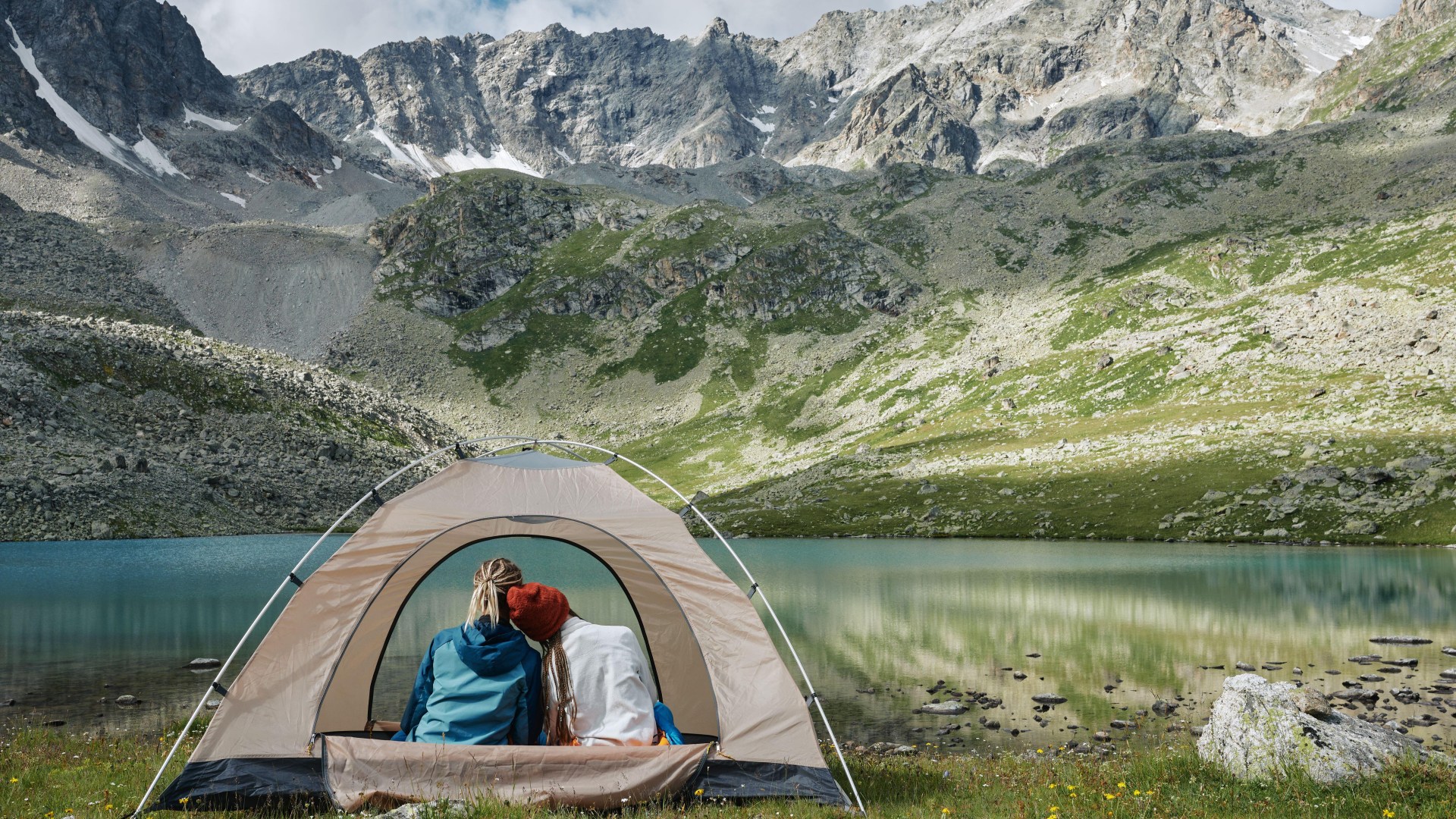