Heading into Lightning In A Bottle music festival, I was excited to see a myriad of different artists on the lineup, but I had no idea what else to expect. Camping for four days in the desert with virtually no phone service, scorching heat, countless dust storms, and no toilets isn’t for the faint of heart. Only the most dedicated music lovers can survive and thrive in that environment, and as a result, the community was the best I’ve ever been part of.

In general, I prefer camping festivals to city festivals, and LIB is now my favorite camping one. Below are just a few of the things that make this festival such an incredible, unique, and worthwhile experience.

Entering LIB festival grounds is like entering Wonderland. I was absolutely blown away by the stage designs, neon lighting, and art installations. While each stage had a completely unique vibe and art associated with it, the three I spent the most time at were Woogie, Junkyard, and Lightning. 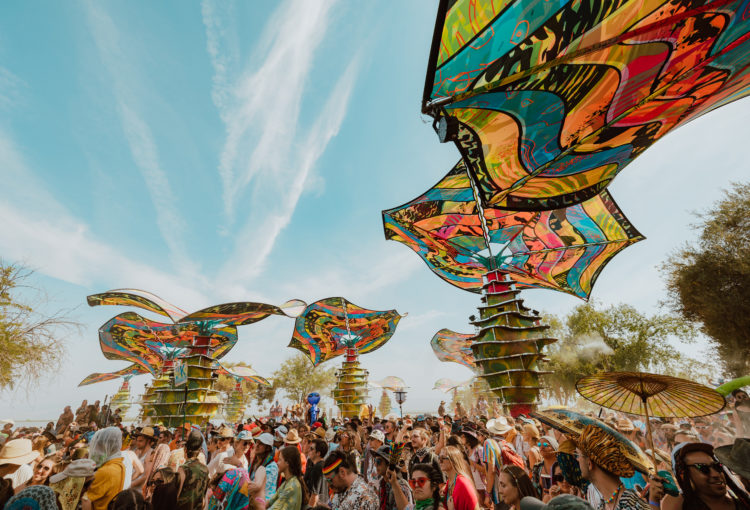 Woogie, the dedicated house and techno stage, had incredible lights. They truly enhanced each artist’s set, accentuating the pounding beats. The sound on this stage was amazing. Even with special concert earplugs, I could feel the blaring techno bass in my chest and soul. The neon art towers that resembled giant mushrooms were fitting, as this stage felt like a separate universe from the rest of the festival. There were tons of people that camped out at Woogie all day, and I can’t blame them. With each artist seamlessly taking over for the previous, it was easy to get sucked into the Woogie vortex. 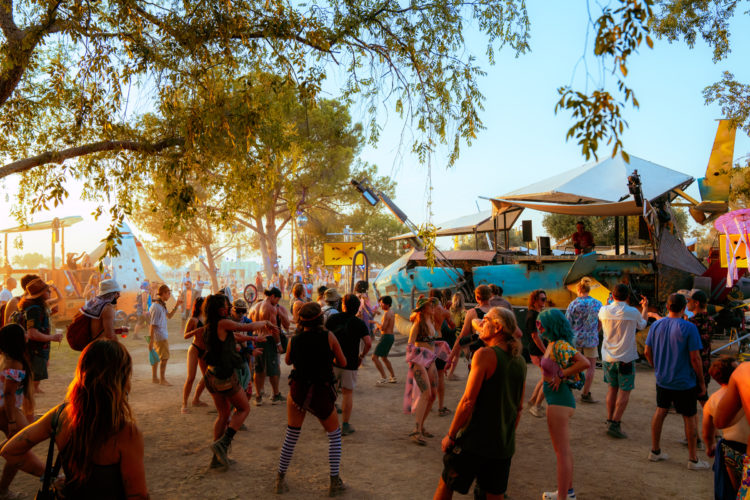 The Junkyard stage looked and felt like a rock concert taking place in the Mad Max universe. There was a plane cockpit that was converted into a sitting area, and towering pillars of scrap metal and other materials that added to the dystopian steampunk vibe. The Junkyard was one of the few stages that had late night sets, and as a result, the people at this stage were pretty chill as they settled into the marathon of dancing. It was really nice though; it felt like taking a break, even while still dancing. 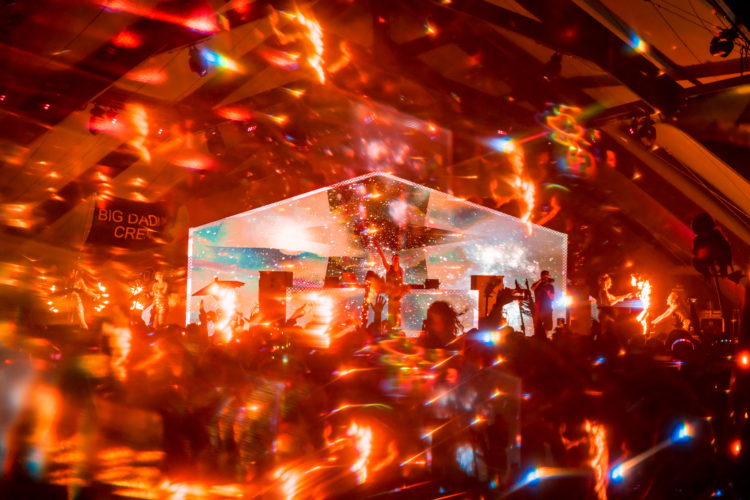 Lightning, the main stage, is definitely the best main stage setup of any festival I’ve been to. The sound was loud without making you feel like you needed ear plugs, and the acoustics were great. But most importantly, there was a ton of space. As a very short person, if I want to be anywhere near the front at a concert, I’m forced to accept that I won’t be able to see anything, and most times venues are so crowded near the front that you can’t dance. I’m thrilled to report that not only was there enough space to dance at the front (and respectful fellow audience members), but I could actually see the entire stage setup and performers. I actually ended up camping out at Lightning most days because of this.

LIB is put on by the Do Lab, the group that does the production for the electronic music stages at Coachella. Unsurprisingly, LIB is almost exclusively electronic music, although there were a few rap, reggae, bluegrass, and funk acts sprinkled in too. While my final tally of sets that I saw clocked in at 17, there were a bunch that stood out from the rest. 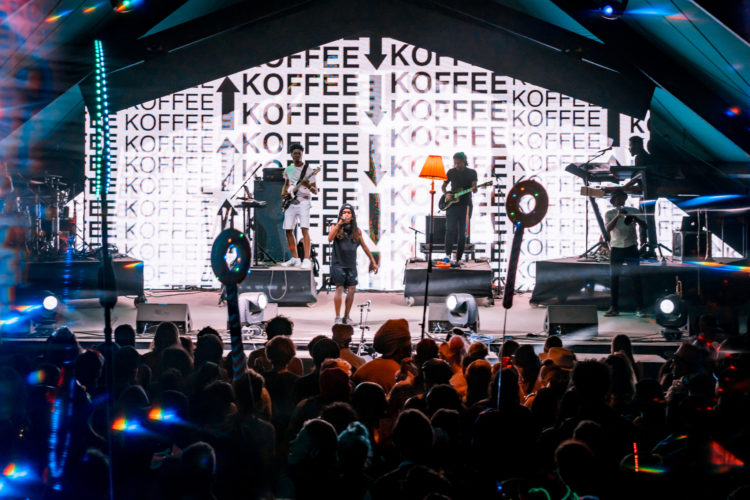 Koffee was a nice break from the harder rave music. Although parts of her reggae set were pretty chill, she brought a full backing band, and it was refreshing to hear completely live music. Not only was her rapping flawless, but the visuals accompanying her set were interspersed with relevant images from the George Floyd protests, which really underlined the themes of her music. I wasn’t sure how the crowd would receive her, given that she isn’t an electronic music artist, but I actually saw the best dancing by the crowd at her show. It seemed like everyone was glad for a chance to get down.

On our second day, Monolink’s live show was an unanticipated high point. He was playing electric guitar, which added a hypnotic texture to his melodic techno beat.. When he spoke to the crowd at the end of his set, he told us that he thinks LIB is the best festival in the world. By that point, I had to agree. 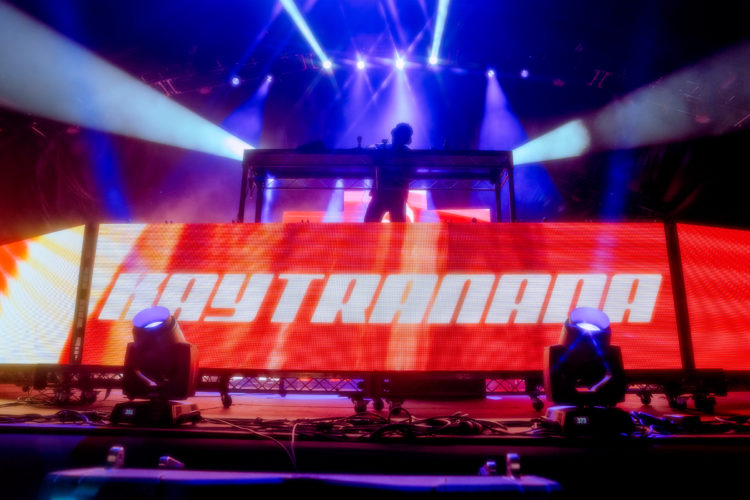 KAYTRANADA was probably the show I was looking forward to most. I’ve seen him at a festival before, but his LIB set blew that out of the water. He actually played more 99.9% era hits than I expected, which was a delightful surprise. Kaytra’s just such a damn good DJ; his transitions and mixing were flawless and he even treated us to some fire dance moves. It was obvious how much fun he was having, and the energy was infectious.

The next day saw Palestinian techno producer Sama’ Abdulhadi, a name I had seen on the underground music circuit before but wasn’t sure what to expect. She unleashed some delicious industrial techno on us. The crowd at her set was what I would expect to see at a European warehouse: wearing understated clothes, fist-pumping to the rhythm, and dancing like no one was watching. It was a really fun break from some of the other bass and house sets I saw earlier in the weekend. 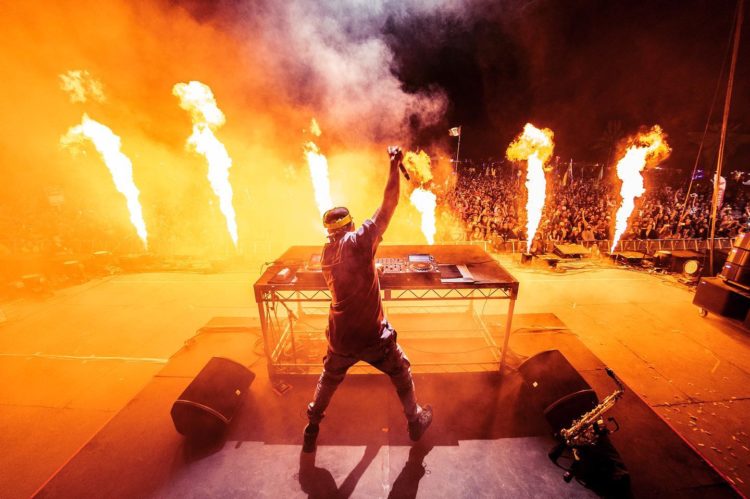 The true king of the weekend, though, was Griz. He closed down the festival with the largest crowd I saw and played the perfect balance of bass-heavy bangers and electro funk jams. He encapsulated all the different genres of electronic music we had seen that weekend, and he felt like such a fitting culmination for the festival. He had the best stage presence of anyone, with off-the-charts energy and charisma. The saxophone solos, pyrotechnics, and strobes that he had were the perfect cherry on top.

3. The Commitment to Diversity and Inclusion

At a time when seeing very few female artists on lineups is all too common, the undercard of LIB was stacked with them. I was stoked to see long-time favorites like Clozee, VNSSA, and Eli & Fur on the lineup, in addition to newer faces on the scene like A Hundred Drums, and Khiva. I also saw more diversity of race in this lineup than others. Considering house and techno were pioneered by Black people, they typically aren’t represented well on lineups. This wasn’t the case here though, as Black Coffee, Seth Troxler, Big Freedia, and HoneyLuv were some of the main house and techno acts during the weekend. 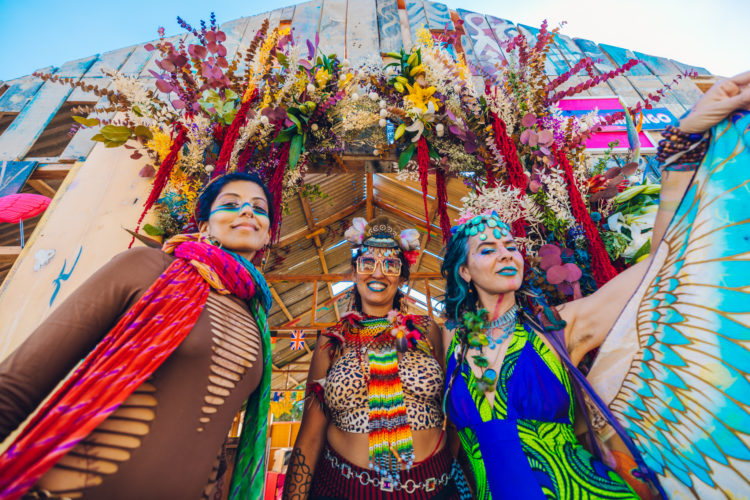 The general atmosphere of the festival felt like a safe space too. The daytime portion of LIB is dominated by talks and workshops. LIB really emphasizes inclusion, community, and respect for the land in their values, and I saw this take shape in the form of several talks on the topic of Indigenous people, healing ceremonies, and countless yoga workshops and classes. 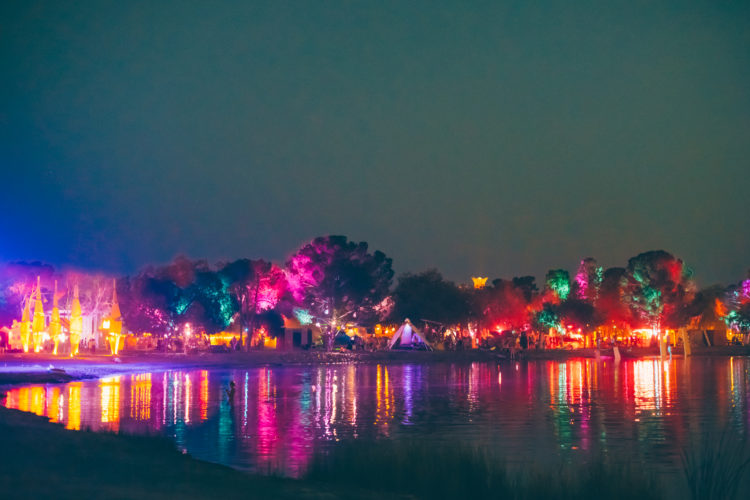 This year LIB was situated right next to Lake Buena Vista. While the water quality was up for debate, it was so nice to be able to take a quick refreshing dip when the temperatures were above 90. Thousands of people brought fun swim floats, and with the music from the Junk Yard carrying across the water, it was a certified party on the water. Even at night, when the temperature cooled off, the water offered a trippy reflection of the festival lights, which made it feel like an extension of the space.

5. The Community of People

I’ve been to many different music festivals, including camping ones before. What differentiated LIB from any other festival I’ve been to was the special community of people in attendance. While other festivals seem to cater to a younger crowd, the average LIB festival goer was in the older, young professional cohort. This resulted in a mature, compassionate, accepting, and safe environment. I had so many amazing interactions with fellow crowd members. LIB really fosters an environment where you can strike up a conversation with anyone and every conversation I had was heartfelt and meaningful. I heard about how one couple met at a warehouse rave, how another had just gotten married, how someone was meeting their significant other’s parents for the first time soon. A simple smile or head nod to your neighbor could turn into a full-blown conversation that would end in connection and hugs. I never even talked about my job or the weather or any other trivial small talk.

I had the privilege to camp with a group of 20 lovely humans patched together from different friend groups, who were attending for their fifth year. I can say with 100% confidence I will be joining them again next year too. 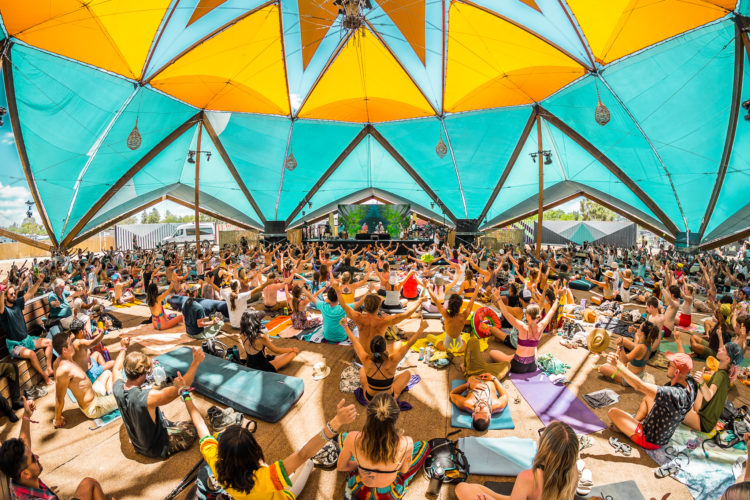 Sun Jun 12 , 2022
A woman is being dragged for telling her future daughter-in-law a family trip was “adults only” when that wasn’t the case, garnering a lot of harsh criticism for the move. The viral Reddit post shared on June 5 titled “[Am I The A**hole] for going home right after I found […] 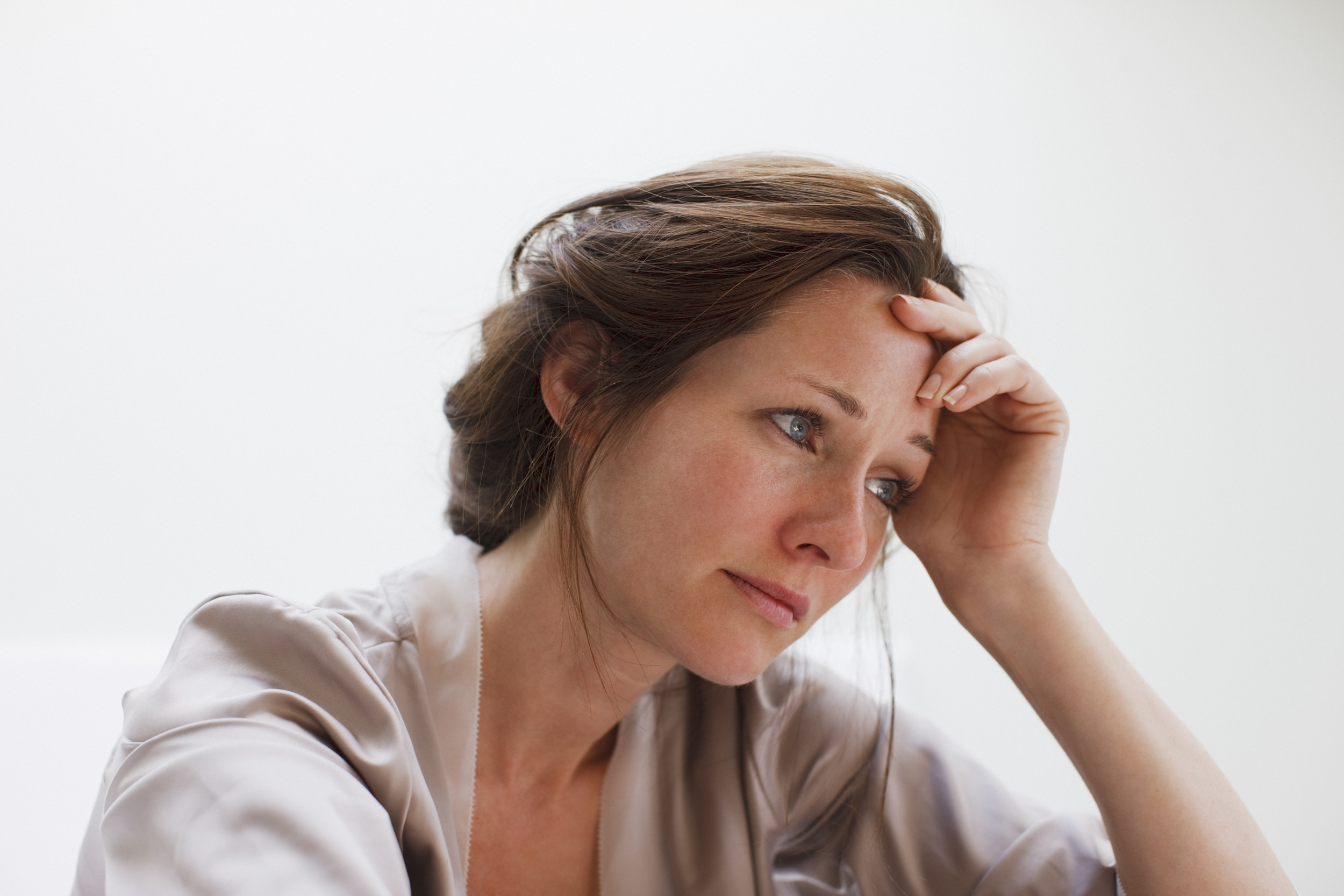